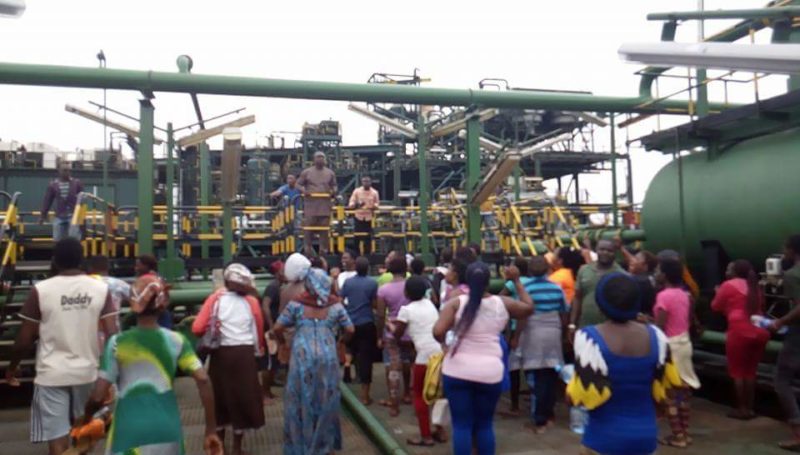 Protesters at a Shell Flow Station in Bayelsa State

A reliable source, who pleaded anonymity, told the News Agency of Nigeria (NAN) that the protesters were from Tanbiri II, Biseni in Yenagoa who were demanding power supply from the nearby oil facility.

NAN gathered that two oil wells, Adibawa well 4 and Adibawa well 10 feeding the Adibawa flow station, were shut down by the protesters.

Mr Oyeso Atena, the Youth President of Biseni Community, said that they were aggrieved over the inability of SPDC to link the community to a power plant located at Adibawa flow station in spite of several meetings.

“We took the step as a last resort following several talks; the oil firm had given us hope, but they later backed out by telling us that the transmission line to our community is not strong enough and cannot carry the power.

“We have several oil wells here and merely shutting two of them has put the entire Adibawa flow station out of action and that shows that without the oil wells from here, the flow station cannot fire and we are just asking that they should give us electricity from that facility.

“We are not asking for too much for a company that has operated here since 1972 and there is no history of hostage taking, no attack on oil workers and no incident of vandalism of facilities.

“Our expectation is that they reciprocate our peaceful dispositions and not take our peaceful nature for weakness, we have vowed to remain here until they respond to us” the youth leader said.

When contacted Spokesman for the Joint Task Force deployed to protect oil facilities in the Niger Delta region said that he had no information on the incident, saying he would verify the claim and respond.

Also efforts to reach Mr Joseph Obari, an SPDC spokesman, were futile as he could not be reached on his mobile phone.