At 2018 Walk for Nature, Asiodu canvasses reconstitution of sanitary inspectors

October 27, 2018 Comments Off on At 2018 Walk for Nature, Asiodu canvasses reconstitution of sanitary inspectors 552 Views

The president, Board of Trustees (BoT), Nigerian Conservation Foundation (NCF), Chief Philip Asiodu, has called for the reconstitution of sanitary inspectors to monitor the environment and mete out sanctions to defaulters. 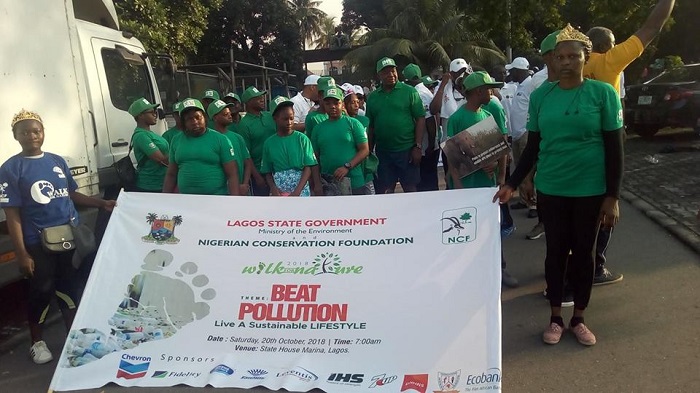 In his address at the 11th NCF/Lagos State government Walk For Nature on Saturday, October 20, 2018 themed “Beat Pollution: Live a Sustainable Lifestyle”, he urged the authorities to sanction those who destroy the environment, like in the colonial era.

According to him, pollution is part of the challenges of big cities around the world; hence the need to tackle it.

“This year’s theme is another wake-up and follow-up call on the 2018 World Environment Day (WED) commemoration. Part of the challenges of any developing mega city is pollution. Lagos is not spared in this menace. The theme is to sensitise the people on the need to embrace best practices on pollution, especially the way we use plastics, which has become a major challenge on land and even more devastating in our waters (creeks, lagoon and the ocean).

“The theme is also in consonance with the endeavours of Lagos State Government in mitigating the effect of climate change. The rally seeks to encourage people to inculcate the Re-use, Recycle and Refuse (3Rs) concept since pollution aggravates climate change,” he said.

He added that the theme of the rally strategically aligned with the Sustainable Development Goal (SDG) 13: taking urgent action to combat climate change and its impacts.

“Beyond this event, NCF has partnered and collaborated with research institutions, universities, government agencies and corporate organisations in providing solutions for the environmental challenges,” he said.

In his keynote address, Governor Akinwunmi Ambode of Lagos described the annual walk for nature as a wake-up call to Lagosians to rise in defence of the environment and collaborate to address the unconscionable pollution of the environment by focusing on attitudes that despoil the land.

Represented by the Commissioner for the Environment, Babatunde Durosinmi-Etti, the governor enjoined everyone to refrain from activities that could cause pollution and degradation of the environment, such as dumping of waste in public drains, burning and improper disposal of plastics.

“Industries should insure treatment of their waste water before final discharge into public drains,” he added, stressing the need for re-use and recycle.

While giving vote of thanks, chairman, National Executive Council (NEC) of NCF, Chief Ede Dafinone, urged the Lagos government to pass a legislation to minimise the use of plastics.

According to him, remains of plastics would not disappear in 500 years.

“At NCF, we are championing the war against plastics,” he added.

Many who spoke at the event had something to say about recycling.

The Head of Human Resources, Fan Milk, Olumide Adediji, disclosed that the company had signed an agreement with a firm to recycle about 10,000 freezers it had used. He added that Fan Milk, one of NCF’s partners in the Walk for Nature, was working on plastics recycling.

On the other hand, the Corporate Social Responsibility (CSR) manager of IHS Towers, Cima Sholotan, said the estate firm was using clean energy from solar energy to power some of its estates.

The event involved about an hour’s walk along Marina with participants from different demographics.

A director in the Lagos Ministry of the Environment, Nasir Ojo, noted that the number of under-five kids that participated in the 2018 walk rose to about 300 per cent. This, he said, means that the older generation is already “handing over” the environment to the owners.