Governor of Osun State, Ogbeni Rauf Aregbesola, has associated the incessant stormy rainfall being experienced in the country to the much-talked-about negative impacts of man on the environment. 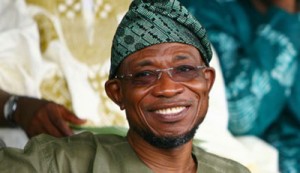 The governor stated this recently during a courtesy visit and the opening ceremony of the Osun Architects’ Sustainable Information Synthesis Forum in Osogbo.

He attributed much of the destruction of the global ecosystem to anti-nature activities of human beings.

According to him, it is these human activities that have led to the worse state the global climate has receded into, manifesting in the harsh weather and incessant natural disaster that the world is witnessing today.

He averred that even though nature is calm but it does not respect human beings and as such could be devastating in form of protest against unconscionable human activities.

Aregbesola, who warned of danger ahead, appealed to all stakeholders in the fight against climate change to sensitise people on the need to engage in reasonable activities.

Besides, he also canvassed for a serious commitment to the greening of the environment by planting multiple trees where one is felled.

His words: “Let me call our attention to the danger – or is it tragedy – the whole world faces today with our climate.

“Have we paused to ask ourselves why we have stormy rainfall constantly nowadays? It is either we experience this hailstorm before or during rainfall and we go about as if this is a normal occurrence.

“No! We are today at the mercy of the nature and it is human activity that has led to this worse climatic conditions we now experience.”

Aregbesola also expressed his worries in the inability of the professional body to come up with a suitable material for building plan 56 years after the exit of colonialism.

He also lamented that over two decades after the continent’s contact with the European and 56 years after independence, Nigerian architects have yet to come up with a policy on which material is best and suitable for building.

He averred that the recommendations of the Nigeria Institute of Architects (NIA) on a building roof suitable and durable for Nigeria is enough catalyst to revamp the nation’s economy.

He stressed that the situation has gone so awry that not only the roofs but also the buildings in both urban and rural areas have so much degenerated to the level that significant numbers of them are no longer fit for human habitation.

“Up until this moment, it is not about the roofing materials alone which are unsuitable but also our buildings both in rural and urban areas have become a serious challenge.

“Our houses in urban settlement even depresses me more: most of them have passed their age of usefulness.

“If the country is committed to reviewing our human habitation through government-inspired efforts and you professionals recommend a new and durable building roofing, this alone is enough and capable of revamping our economy,” Aregbesola said.

He called on architects to be helpful in preventing the building anarchy of modern times, adding that they should also see to era of incidents of encroachment on roads and illegal structures that is becoming rampant in our society.

Aregbesola held that encroachment and illegal structures will have been avoided if architects have helped their clients do due diligence by obtaining proper documentation for their property before building.

According to him, “in Osun, we have not only reduced the cost, we have also simplified the process of obtaining land documents and building approvals in this state.

“This is in our quest to enhance urban aesthetics, prevent future separation of buildings from roads and bring about the security that possession of documents brings. It is my hope that our architects will support this programme adequately and increase the awareness on this with their clients.”

NIA President, Tony Oliver-Braid, has described Osun as a unique state in the whole of the country.

Oliver-Braid, who also described Governor Rauf Aregbesola as an extraordinary governor, disclosed that Osun is the only state in Nigeria that has at least one architect in a local government and over 50 architects engaged by the state’s Local Government Service commission.

The NIA President gave the statistics during a courtesy visit to the governor and the opening ceremony of its two-day conference tagged Osun Architects’ Sustainable Information Synthesis, OASIS Forum 2016, and the 20th Anniversary of NIS by the by Osun NIA.

The theme of conference is: “Join the Race to Make this World a Better Place.” It held at the Multipurpose Hall, Local Government Service Commission, State Secretarial, Abere.

Oliver-Braid, who was represented by the institute’s third Vice President, Enyi Ben Ehbo, said the governor’s landmark programmes and achievement are visible for all to see.

He said: “We commend you for the tremendous work you are doing despite the lean resources.

“As a seasoned Nigerian, we can see the work you are doing. With the number of architects we have in your state, Osun should see itself as the home of architecture in Nigeria.”

He said the theme of the conference was designed to herald the United Nations Environment Day, which comes up every June 5th of the year and the World Habitat Day, celebrated first Monday of October every year.

He called on governments and all stakeholders in the preservation of planet earth to take affirmative action to save the world, adding that there should be zero tolerance for killing of animals and take time to safeguard some of them, who are now endangered species.

He assured the governor that the impact of architects would be noted in every local government of the state very soon.