June 25, 2018 Comments Off on Americas urged to collaborate to tackle global challenges 1,183 Views

Countries in North and South America have been urged to join hands to tackle cross-border and cross-cutting global issues that may be challenging to an individual nation. 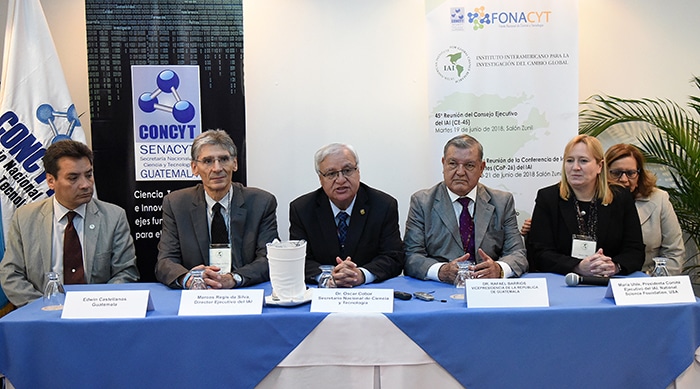 Executive Director, Inter-American Institute for Global Change Research (IAI), Marcos Regis da Silva, made the submission on Wednesday, June 20, 2018 during the opening of the 26th meeting of the Conference of the Parties (CoP-26) to the IAI in Antigua, Guatemala.

The IAI director emphasised the organisation’s efforts in providing transdisciplinary research with a regional framework that responds to the needs and priorities of Parties based on scientific knowledge.

While opening the CoP and welcoming delegates, CoP Chair and National Secretary for Science and Technology (SENACYT) in Guatemala, Oscar Cobar, stressed that scientific knowledge is the best resource for all countries in all regions to tackle the issues of global change.

Rafael Barrios, speaking on behalf of Guatemalan Vice-President Jafeth Cabrera, underlined the need for more and improved knowledge on climate change, highlighting the relevance of the IAI in this regard.

During the CoP, presentations were made on: Mayan science, culture and civilisation; Science-Policy Workshop recommendations; science and technology impact projects in Guatemala; and climate action in Guatemala.

SAC Chair, Edwin Castellanos, who is of the Universidad del Valle de Guatemala, presented outcomes and recommendations from the Science-Policy Workshop that was held on June 19. He underlined the importance for the CoP to have a better vision for the IAI’s direction in the coming years.

While discussing the work of the SAC and SPAC that was presented in the workshop, he highlighted work related to dry forest, nitrogen cycles and AGUASCAPES as examples of how the IAI promotes scientific research and links research to the national and international policy agendas.

Cobar described science and technology in the Guatemalan context, and outlined the ways in which financing is provided for research and science projects in his country. He noted that investment in science, technology and innovation (STI) represents only 0.029% of Guatemala’s GDP, the lowest in the region.

Cobar highlighted that: Guatemala is one of the few countries in the region with a constitutional article on science and technology; two laws have been passed to operationalise the article; and the budget exclusively for funding science and technology totals around $3 million annually. He called for: more student involvement in knowledge generation; building research skills; building a “knowledge society” based on STI; and more government investment in STI.

Speaking in his capacity as professor at the Universidad del Valle de Guatemala, Castellanos emphasised the need to accelerate national action towards reducing the impacts of climate change and bridging the gap between the current situation in Guatemala and what is required under the Paris Agreement.

He described the creation of the Guatemalan System of Climate Change Science (SGCCC), a national, multi-stakeholder science body on climate change, which: evaluates and generates scientific information on climate science, adaptation and mitigation; passes this information on to policymakers; and emphasises the importance of indigenous knowledge and traditional ways of life in Guatemala.

Tata Felix Sarazua, a representative from the Sotz’il, a Mayan indigenous community, presented actions on climate change, stating that Mayan science is “the energy” that fosters in-depth research and provides advice to their communities. He explained the concept of “cosmovision” in which Mayan science and technology combine ancestral knowledge, spirituality and epistemology obtained through observation and experimentation, and the formulation and verification of hypotheses.

Sarazua underscored the capacity of Mayan indigenous peoples to adapt to their environment as a result of their scientific knowledge, and that they, therefore, possess alternative solutions that can contribute to climate change adaptation. He underscored differences between Mayan and Western science and ways of accumulating and using knowledge, and called for a mixed approach using both sciences to tackle climate change.