African mayors and local authorities, who met at 8th edition of the Africities Summit in Marrakech, Morocco, from November 20 to 24, 2018 have expressed the determination to establish a climate that is conducive to social harmony within the territories and which rejects discrimination of all kinds, stigmatisation and xenophobia. 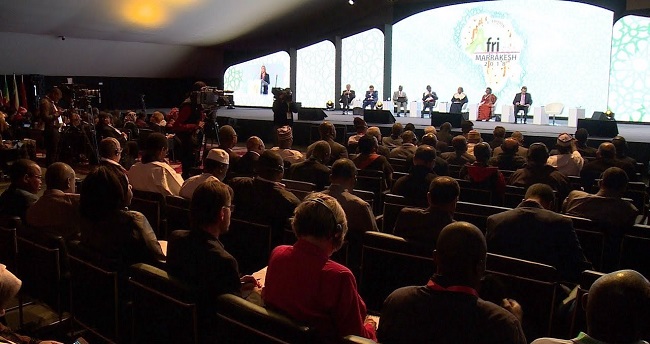 Delegates at the Political Segment of Africities 8

They made the submission in a resolution tagged: “Declaration of Mayors and Local Authorities in Africa” released on Saturday, November 24 at the close of the weeklong conference.

They also expressed concern over issues related to migration and the plight of migrants, the youth, traditional leadership and other groups.

They said: “We are convinced that Africa has a rightful place to occupy in the world of today and of tomorrow, provided that it knows how to rely on its deep cultural values and identities, to invent a new modernity bringing together democracy and sovereignty and as Mayors and local governments of Africa are determined to be part of this momentum, ready to take the responsibility of implementing the transition to Sustainable Cities and Territories, so that the Africa that we want by 2063 will be an Africa that is open to the world and true to itself.”

According to them, in line with its demographic transition, Africa needs to transform itself to meet new challenges.

“To sustain the urbanisation process, the subnational governments will have to plan for the increasing numbers of young people, vulnerable people and the high demand for public services, growing informalisation, exclusion, marginalisation and impoverishment. Without adequate planning by sub-national governments, this may lead to high risks of fragility, explosion of social and spatial disparities,” the mayors and local authority officials declared.

The expressed concern over the fact that the decentralisation processes on the continent are not uniform and that even within the subregions there are variations in the state, forms, and how decentralisation is implemented.

This, the delegates pointed out, is due to the sovereignty and diversity of the countries., adding that the number of subnational structures / governments, the types of structures, and sizes all vary from country to country and that they are not determined by the rate of urbanisation.

They also expressed the fact that the decentralisation processes in Africa takes place in the particular context of globalisation, urbanisation, democratic and political transition, economic and social, geopolitical, cultural and ecological transition and climate change.

On governance, they demanded that effort should be made to make the lower levels of government more democratic as, according to them, it has been noted that there are still elements of control by the centre.

They emphasised that involving sub-national level governments is key to national planning since they (sub-national governments) are at the forefront of local development planning.

They embraced approaches and strategies stipulated in the numerous global agendas (such as Paris Agreement on climate Change, Sustainable Development Goals, New Urban Agenda and Agenda 2063), pointing out that “development and change takes place at the spatial level and that sudden and total change occurs and then materializes in addressing the main global agendas”.

ALSO READ:  What we miss while in Nigeria, by Cameroonian refugees

They affirmed the provisions of the global development agendas that recognise the importance of the territories and the role of cities and local authorities as essential development partners, even as they declared: “Sub-national governments are therefore calling for a responsive institutional and policy framework for the operation and self-organizing initiatives, a new national pact reinforcing their legitimacy and strategies that take into account improved public services and the demands of the populations and the allocative efficiency of the public policies.”

They stressed that the implementation of the recommendations of AfriCities 8 must focus more on the territories and requires transition towards sustainable development.

The summit had “The Transition to Sustainable Cities and Territories: The Role of local and Sub-National Governments of Africa” as its theme.