WaterAid has welcomed the pledges of African leaders to eliminate inequalities and end open defecation in their countries by 2030, and to work towards giving every person access to safe sanitation and good hygiene. 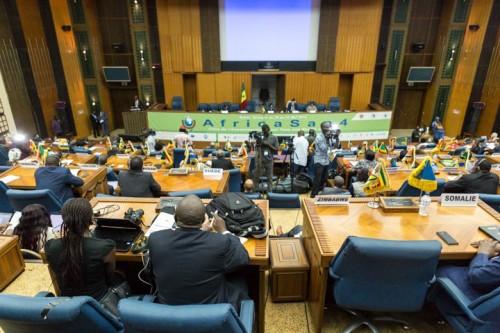 The declaration closes AfricaSan 4, a conference of African governments, civil society and development partners from 25-27 May in Dakar. The event was inaugurated by the president of Senegal.

Ngor – meaning ‘dignity’ in Wolof, the Senegalese national language – is an ambitious declaration highlighting the commitment of African countries to put the elimination of open defecation among their top priorities, and advance towards the aspirations of the Sustainable Development Goals to reach everyone, everywhere with clean water and basic sanitation by 2030.

The Ngor declaration also emphasises the importance of eliminating inequalities, which will require redoubled efforts to reach the poorest, those living in slums or remote rural areas and other marginalised groups. Sanitation is to be understood as a service, rather than simply infrastructure – including work to change behaviours as well as the safe management of faecal sludge, a pressing issue especially in informal urban settlements.

These commitments, if followed up and monitored, will ensure the protection of dignity and health of everyone in Africa.

Mariame Dem, Head of West Africa for WaterAid, said: “We are glad to see this commitment from African leaders to re-evaluate priorities and fast-track progress on sanitation, to eliminate open defecation and bring better health and dignity to their citizens. These are ambitious commitments; with political will and financing, they are achievable.

“Every man, woman and child in the world deserves the dignity of a safe, hygienic toilet. Yet nearly 650 million sub-Saharan Africans are still without access to basic sanitation. We know that ambitious commitments alone are not enough. Leaders need to deliver on their promises.”

The timing of the Ngor declaration is critical. Poor sanitation in Africa undermines the continent’s social and economic development. It also carries serious health impacts. Diarrhoea kills 400,000 children in sub-Saharan Africa each year and causes the loss of an estimated 1-2.5% of GDP annually from medical costs and reduced productivity.

While the proportion of people practising open defecation in sub-Saharan Africa decreased by 11% between 1990 and 2012, the actual number of people forced to relieve themselves at roadsides and in fields has actually grown by 33 million, because of the continent’s rapid population growth. WaterAid analysis suggests at current rates of progress, sub-Saharan Africa will not meet even the original Millennium Development Goal on sanitation – to halve the proportion of people without access to basic sanitation – for 150 years.

Dr. Michael Ojo, WaterAid Nigeria’s Country Representative, said: “In Nigeria, the proportion of people practising open defecation between 1990 and 2012 has only decreased by 1%. This figure needs to change and progress must be accelerated if the country is to experience real development.

“Universal access means ensuring everyone everywhere has access to a safe, hygienic toilet at home, at school, in health centres and in other public places. This is the only way we can have a fighting chance of eliminating open defecation.

“The Ngor declaration is another promise we must hold our leaders accountable for but it is also one we all must take responsibility for making a happen.”

Less than four months remain before United Nations member states finalise new Sustainable Development Goals (SDGs), which aim to end extreme poverty and will guide the path of development for the next 15 years. WaterAid is campaigning for a dedicated SDG on water and sanitation, and inclusion of water, sanitation and hygiene into goals, targets and indicators.

WaterAid has unveiled a redesigned WASHWatch reporting system to track African nations’ commitments to bringing water and sanitation to their citizens. It shows that 53.3 million Africans must be reached each year for the next 15 years if we are to reach everyone with basic sanitation by 2030. The map also shows that although 0.5 million people are currently gaining access to basic sanitation in Nigeria every year, this will need to increase by an extra 12 million people to reach everyone by 2030.