The Environmental Rights Action/Friends of the Earth Nigeria (ERA/FoEN) has announced the release of Justina Ojo, wife of its Executive Director, Godwin Uyi Ojo, who was abducted by unknown gunmen last Monday. 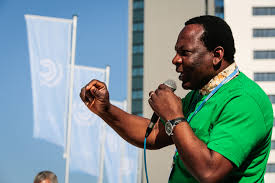 Justina was kidnapped in front of her residence around 8pm on February 22, 2016 in Benin and was only released last night (Friday, February 26) to her family in Benin City, the Edo State capital.

In a statement issued in Lagos, the environmental justice group thanked Nigerians, religious organisations, local and international groups for their solidarity, prayers, encouraging words and actions throughout the period of Justina’s abduction.

ERA/FoEN Deputy Director, Akinbode Oluwafemi, said: “Words cannot express our joy at the reuniting of Justina Ojo and her family. We are happy she was returned unhurt and in good condition to her family.

“We particularly want to thank our allies both local and international for their show of solidarity, unity and encouragement all through the period of trauma for the Ojo’s and the entire ERA/FoEN family.

“Justina has been re-united with her immediate family and they prefer to spend coming days for quiet reflections on the events of this traumatic week.”

Oluwafemi, however, added that, with the release of Justina, “we expect the Nigerian Police to carry out its statutory responsibility of identifying those responsible for the reprehensible act and bringing them to book.”

ERA/FoEN also called on security agencies to rise up to the responsibility of providing security for all citizens given the rising wave of violent crimes in the country.

“It is a primary responsibility of government is to guarantee the safety and security of all citizens. At times like this, people in power should work towards security for all and not security for a few and the affluent. The present government must do all that is needful to keep this country safe for all,” Oluwafemi added.

Bothered by the seemingly slow pace of work in the clean-up of Ogoniland by the ...