How 5th climate report relates to East Africa, by IPCC

February 24, 2015 Comments Off on How 5th climate report relates to East Africa, by IPCC 939 Views

The Intergovernmental Panel on Climate Change (IPCC) presented the findings of its latest report in Nairobi on Monday to policymakers, civil society, scientists and students from Kenya and other East African countries. 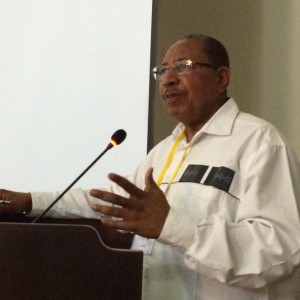 Written by over 800 scientists from 80 countries, and assessing over 30,000 scientific papers, the Fifth Assessment Report (AR5) tells policymakers what the scientific community knows about the scientific basis of climate change, its impacts and future risks, and options for adaptation and mitigation.

The key findings of AR5, as expressed in the Synthesis Report released on 2 November 2014, are:

For East Africa, the IPCC AR5 highlights risks from climate change including those related to food and water security, changing patterns of disease, and extreme weather events. Addressing current vulnerabilities can reduce today’s climate risks and contribute to climate-resilient development over the coming decades.

“The longer we wait, the harder it will be to deal with climate change,” said Youba Sokona, Co-Chair of Working Group III, who presented the Synthesis Report as well as IPCC Working Group III’s findings to the meeting.

Around 300 people from Kenya, both from Nairobi and the rest of the country, registered for the event, and delegates from East Africa and other countries to a Session of the IPCC starting the following day were also invited.

The IPCC is the world body for assessing the science related to climate change. The IPCC was set up in 1988 by the World Meteorological Organisation (WMO) and United Nations Environment Programme (UNEP), and endorsed by the United Nations General Assembly, to provide policymakers with regular assessments of the scientific basis of climate change, its impacts and future risks, and options for adaptation and mitigation.

The IPCC does not do its own research, conduct climate measurements or produce its own climate models; it assesses the thousands of scientific papers published each year to tell policymakers what we know and don’t know about the risks related to climate change, and identifies where there is agreement in the scientific community, where there are differences, and where further research is needed. Thus the IPCC offers policymakers a snapshot of what the scientific community understands about climate change rather than promoting a particular view. IPCC reports are policy-relevant without being policy-prescriptive.

The IPCC may set out options for policymakers to choose from in pursuit of goals decided by policymakers, but it does not tell governments what to do. To produce its reports, the IPCC mobilises hundreds of scientists who – like the Chair and other elected officials – work as volunteers. These scientists and officials are drawn from diverse backgrounds. They are not paid for their work at the IPCC. Only a dozen permanent staff work in the IPCC’s Secretariat. The members of the IPCC, comprising the Panel, are its 195 member governments. They work by consensus to endorse the reports of the IPCC and set its procedures and budget in plenary meetings of the Panel.

The word “Intergovernmental” in the organisation’s name reflects this. It is not a United Nations agency, but is sponsored by two UN organisations – WMO and UNEP.

IPCC reports are requested by the member governments and developed by authors drawn from the scientific community in an extensive process of repeated drafting and review. Scientists and other experts participate in this review process through a self-declaration of expertise. The Panel endorses these reports in a dialogue between the governments that request the reports and will work with them and the scientists that write them. In this discussion the scientists have the last word on any additions or changes, although the Panel may agree by consensus to delete something.

The IPCC produces comprehensive assessment reports on climate change every six years or so. The IPCC completed the AR5 with the release of the Synthesis Report on 2 November 2014. AR5 is the most comprehensive assessment of climate change ever undertaken. Over 830 scientists from over 80 countries were selected to form the author teams producing the report. They in turn drew on the work of over 1,000 contributing authors and over 1,000 expert reviewers. AR5 assessed over 30,000 scientific papers.

Besides the Synthesis Report, AR5 includes the contributions of IPCC Working Group I (the physical science basis of climate change), of Working Group II (impacts, adaptation, and vulnerability), and of Working Group III (mitigation of climate change). The Synthesis Report distils, synthesises and integrates the findings of the working group contributions into a concise document. This integrated approach allows the Synthesis Report to draw together the assessment of past changes in climate as well as projections for the future from the three working group reports as well as the two Special Reports brought out in 2011. It covers both adaptation and mitigation to provide an overview of possible risks and solutions.