Over 40,000 persons are expected to attend the Paris Climate Change Conference (COP 21) in December this year, the French Ambassador to India, François Richier, has said. 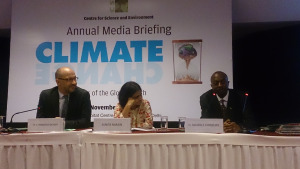 Richier says the French government will offer free visas to journalists. He was speaking during the final day of the Annual Media Briefing on Climate Change organised by Centre for Science and Environment (CSE), an environment think tank based in India.

Over 100 journalists from the continents of Asia and Africa attended the two-day event held at India Habitat Centre in New Delhi a couple of weeks ago.

In her remarks, the CSE Director General Sunita Narain petitioned developing countries to negotiate powerfully during this conference.

“It is important for developing countries to negotiate strongly in Paris. It is critical that countries from South Asia and Africa send their best people and negotiate hard on climate change,” said Sunita.

Most speakers during the event blamed the developed countries for the present state of global warming.

The world is already looking at the prospect of not containing climate change within 2 degrees Celsius. And, to achieve this, the Zambian deputy high commissioner Sikapale Chinzewe who also spoke during this occasion, insisted that climate change resolutions must be legally binding.

Speaking in a session to discuss American consumption trends, CSE Director General Sunita Narain said that if the US did not make serious changes to its “conspicuous consumption”, climate change mitigation efforts would not be as successful as US needed to lead the way, having been the highest emitter in the world. 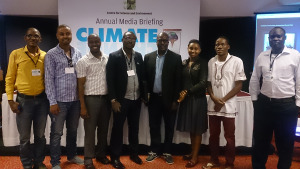 Earlier, CSE Deputy Director General Chandra Bhushan said that the per capita annual emission of the United States would be 12 tonnes while that of the European Union would be five tonnes in 2030.

“People live well in the EU. Americans need to scale down their lifestyles,” he said.

One of the journalists, Kaah Aaron Yancho, from Cameroon, who is also a member of Water Journalists Africa and writer for WaterSan Perspective, lamented that the western media was shaping the agenda in developing countries instead of the indigenous media in these countries.

“We need to ensure that our policies are not affected by the powerful but biased foreign media,” he said.