The Federal Government on Thursday, December 3, 2020 expressed concern over the increase of flooding and reiterated commitment to intensify efforts to effectively address the situation.

The forum with the theme: “Flood Disasters, An Imperative for Environmental Governance“ was organised by the National Environmental Standards and Regulations Enforcement Agency (NESREA).

Abubakar said that flooding was a very major issue the nation faces, adding that the ministry was collaborating with relevant stakeholders to ensure that the problem was tackled effectively.

“The Federal Government is concerned about the increase in flooding situation causing destruction of many lives, property and agricultural lands, especially in some of the states across the country.

“This year alone, a lot of farmers in the states have lost their farm lands and this situation has caused about increase in the cost of living.

“Flooding has caused a lot of setback in the sector, so, I want to let Nigerians know that the government is worried and concern and seriously working towards addressing the situation.

“The ministry will be presenting a memo to the National Executive Council (NEC) on flood control including the possibility in tackling it.

“The presentation will be chaired by the Vice President, Prof. Yemi Osinbajo. We are going to do that presentation in ways and manners whereby flooding can be prevented,’’ he said.

Abubakar said that the best time to discuss about flooding was this dry season to enable an early start of preparations on how to mitigate the situation before rainy season would commence.

He mentioned some of the causes of flooding such as putting structure within the flood plains and inadequate drains in an environment, as well as indiscriminate dumping of refuse, among others.

Environment Minister for State, Mrs Sharon Ikeazor, said that the objective of the forum was to create an occasion for deliberation on the importance of curbing the menace associated with flood disasters in the country.

Ikeazor said that NESREA was committed to confronting the menace of flooding through the enforcement of preventive measures.

“I call for the cooperation of all stakeholders, especially Ministries, Departments And Agencies (MDAs) along with NESREA in all this important duty of preventing the cases of flooding in the country.

“Other stakeholders must also have roles to play, including the regulated community, the judiciary, the academia, the civil society organisations, the faith-based organisations and the citizenry.

“Let us take the abating of flooding as the battle in which we shall no longer lose ground. It has become so imperative,’’ she said.

Also, the Director-General of NESREA, Prof. Aliyu Jauro, said that the agency was committed to implementing some of projects that would help to minimise the flooding in the country.

He said that the forum would delve into finding the remote and immediate causes of flooding in the country.

He added that the objective of the forum was strategies for effective synergy in line with MDAs and law enforcement agencies in preventing flood disaster in the country.

He, however, urged participants to rise up to this imperative of environmental governance as such would save the country from further devastation by avoidable floods. 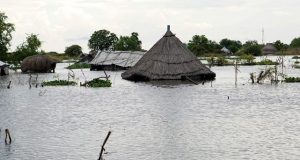 The Bayelsa State Government says it has adopted scientific methods in finding solutions to the ...