Forget solar roofs. The world’s first solar road is here, in the small village of Tourouvre-au-Perche in Normandy, France. The 1km road was opened a week ago by French Ecology Minister Ségolène Royal and could generate enough electricity to power the street lights. 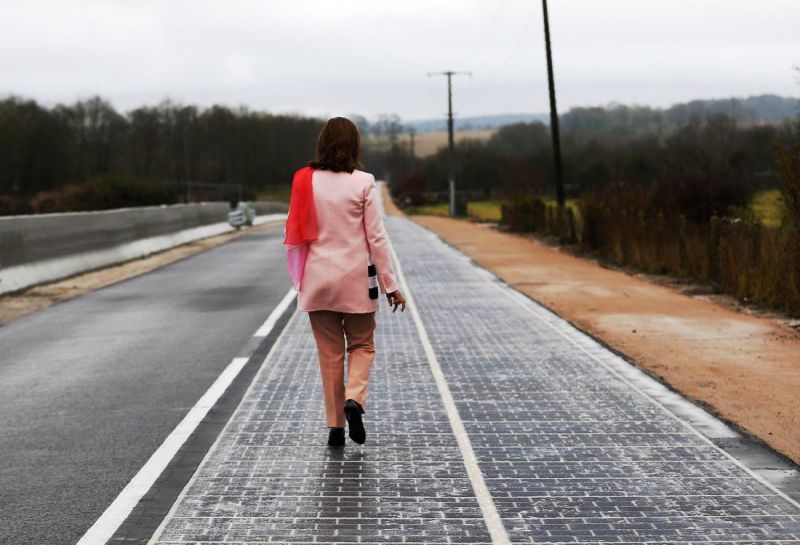 French Minister for Ecology, Sustainable Development and Energy Segolene Royal walks on a solar panel road during its inauguration in Tourouvre, Normandy, northwestern France.
The world’s first solar road was inaugurated in Normandy, a technology the minister hopes will develop in France and abroad despite criticism of its high cost and profitability. Photo credit: Charly Triballeau/AFP/Getty Images

That might not sound very impressive for 30,000 square feet of solar panels – and it kind of isn’t, especially for its $5.2 million price tag. The panels have been covered in a silicon-based resin that allows them to withstand the weight of passing big rigs and, if the road performs as expected, Royal wants to see solar panels installed across 1,000km of French highway.

There are numerous issues, however. For one, flat solar panels are less effective than the angled panels that are installed on roofs, and they’re also massively more expensive than traditional panels. Colas, the company that installed the road, hopes to reduce the cost of the panels going forward and it has around 100 solar panel road projects in progress around the world.

Solar Roadway is another company looking at building roads with solar panels, and it installed a small number of panels at the Route 66 Welcome Center in Conway, Missouri earlier this year. Still, they’re facing the same seemingly insurmountable cost problems as Colas and the French.

Maybe those solar roofs from Tesla are the better way to go after all.

By Jordan Golson (The Verge)