World Wildlife Day: A call to protect the big cats

Lion, tiger, leopard and jaguar are all considered majestic animals and symbols of power and courage. Yet globally they all face significant threats to their survival in the wild. 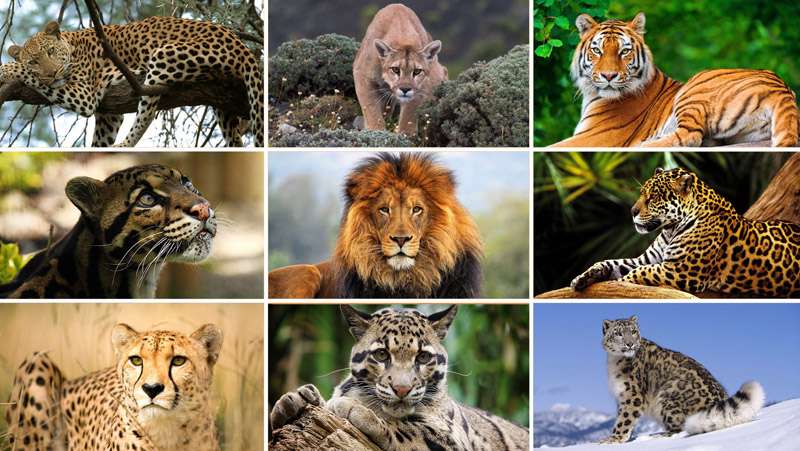 All of the world’s big cats will come under the international spotlight on World Wildlife Day 2018, as the CITES Secretariat, the UN-designated global facilitator of the World Wildlife Day, in Geneva on Sunday, September 3, 2017 announced the theme of the most prominent global annual wildlife event as “big cats”.

The World Wildlife Day, an opportunity to celebrate the varied forms of wild fauna and flora and to raise awareness of the multitude of benefits that conservation provides to people, is observed on March 3 of every year.

According to CITES (the Convention on International Trade in Endangered Species of Wild Fauna and Flora), big cats are among the most widely recognised and admired animals across the globe. However, today the charismatic predators are said to be facing many and varied threats, which are presumably caused by human activities.

Overall, their populations are said to be declining at a disturbing rate due to loss of habitat and prey, conflicts with people, poaching and illegal trade. For example, tiger populations plummeted by 95% over the past 100 years and African lion populations dropped by 40% in just 20 years. But a range of measures are underway to arrest this decline.

In an effort to reach as wide an audience as possible, the expanded definition of big cats is being used, which includes not only lion, tiger, leopard and jaguar – the four largest wild cats that can roar – but also cheetah, snow leopard, puma, and clouded leopard, among others. Big cat species are found in Africa, Asia, and North, Central and South America, representing a virtually global distribution, and representations of big cats, such as for car logos, by sporting clubs and the fashion industry, are used globally.

Logo of the World Wildlife Day

Secretary-General of CITES, John Scanlon, said: “Over the past century we have been losing big cats, the planet’s most majestic predators, at an alarming rate. World Wildlife Day 2018 gives us the opportunity to raise awareness about their plight and to galvanise support for the many global and national actions that are underway to save these iconic species. Through World Wildlife Day big cats will generate the level of attention they all deserve to be sure they are with us for generations to come.”

While big cats are found across several continents, trade in these wild animals and their products is global and comes in many forms, including as live animals, for decoration, fashion and medicine, and as hunting trophies. As an example, almost every part of a tiger has a market – but international commercial trade in the species has been prohibited since 1987.

As noted in the first UN World Wildlife Crime Report published by the United Nations Office on Drugs and Crime (UNODC) in 2016, international illegal trade in big cat skins reflects many of the characteristics that are indicative of organised criminal activity.

“All big cats are protected under CITES due to the fact that unregulated and illegal trade poses serious threats to their survival. For nearly 20 years, CITES has highlighted the role of organised criminal activity in the illicit trafficking in Asian big cats, which have always been high on the CITES agenda, and over the last seven years we have seen our efforts to combat transnational organised wildlife crime at global level and on the front lines significantly enhanced,” added Scanlon.

In line with the UN General Assembly Resolution proclaiming World Wildlife Day, the CITES Secretariat calls on all member States and organisations of the United Nations system and other global, regional and sub-regional organisations, non-governmental organisations and all interested individuals, to: