May 17, 2017 Comments Off on World Hypertension Day: Seven out of 10 Nigerians are hypertensive, says expert 1,718 Views

Prof. Modupe Onadeko, a former Reproductive Medicine Consultant at the University College Hospital (UCH), Ibadan, has said that no fewer than seven out of 10 Nigerians are hypertensive. 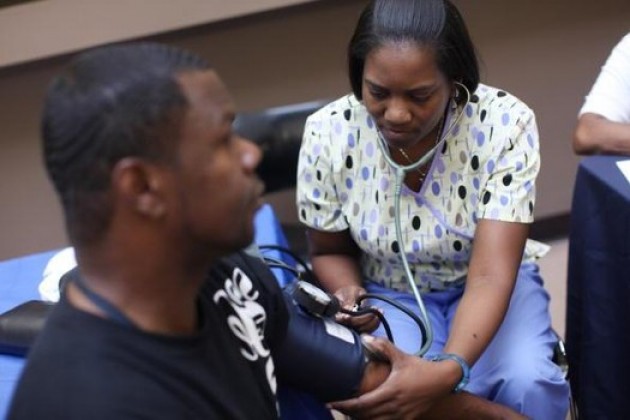 The theme of the 2017 World Hypertension Day is: “Know Your Blood Pressure”

Onadeko made this disclosure while speaking with the News Agency of Nigeria (NAN) on Wednesday in Ibadan, the capital of Oyo State, on the occasion to commemorate the 2017 World Hypertension Day.

According to the consultant, 50 per cent of the affected people are unaware of their condition while the remaining ones do not even bother to seek any medical help.

ALSO READ:  These tobacco loud mouths and the rest of us

The day is not a work free day but it was set aside to increase public awareness about hypertension and why everyone should maintain a normal blood pressure.

The theme of the 2017 occasion is: “Know Your Blood Pressure”.

Onadeko said in order to avoid complications arising from hypertension, one of which is stroke, patients should avoid certain habits such as smoking and alcohol intake.

She said that it was better for the patient to adopt low sodium (salt) intake of 1.5 to 2.5 g, low-fat and high-fiber diet, fruits and green vegetables.

She said: “Treating the disease also involves proper physical exercise: aerobics, healthy weight, regular pulse, and low cholesterol level as well as a record of healthy family history among others.”

Onadeko advised that people should adhere to their doctor’s instruction on healthy diets and physical exercise because hypertension is a “silent killer”.

The UCH Mortality Report and Statistics indicated that, from January to December 2014, stroke due to High Blood Pressure was the leading cause of death.

In the report compiled by Prof. Temitope Alonge, out of the total 1,915 deaths recorded in UCH, stroke came first with 201/10.5 per cent of the record.