Pope Francis on Monday, October 17, 2017 called for governments around the world to collaborate to make migration a safer and voluntary choice, arguing that assuring food security for all requires tackling climate change and ending conflicts. He made the call at the global ceremony to mark World Food Day, held at the UN Food and Agriculture Organisation (FAO) headquarters. This year’s theme focuses on addressing migration through investing in food security and rural development. 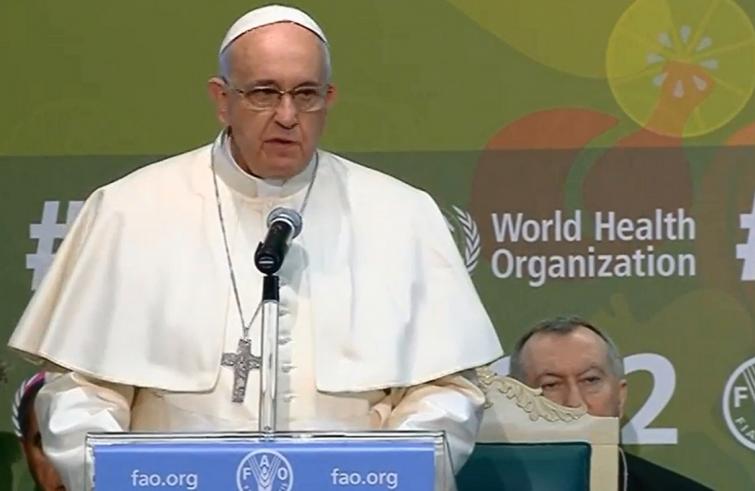 “It is clear that wars and climatic change are a cause of hunger, so let’s not present it as if hunger is an incurable disease,” the pontiff said during his key note address.

He called for a total commitment to gradual and systematic disarmament, and urged a change to lifestyles, the use of resources and the production and consumption of food to protect the planet.

In reference to the development of the Global Compact on Safe, Regular and Orderly Migration – the first agreement of its kind negotiated by governments under the auspices of the UN – he said, “Managing human mobility requires a coordinated, systematic intergovernmental action in line with existing international norms, and full of love and intelligence”.

“What is at stake is the credibility of the whole international system,” he added.

He also said it was unfortunate that “some” countries are moving away from the Paris Agreement on climate change.

Change the future of migration

Each year millions of people leave their homes to escape hunger, poverty and conflict.”

More and more people migrate because they do not have the option to remain in their homes and lands,” said FAO Director-General, José Graziano da Silva.

“It is our intention to address the root causes of migration, such as poverty, food insecurity, inequality, unemployment and lack of social protection. To save lives, we need to rebuild the environment in which people live, reinforcing their resilience and ensuring their livelihoods to offer them the possibility of a dignified way of life,” he said.

World Food Day is being marked this year as global hunger rises for the first time in over a decade, affecting 815 million people or 11 per cent of the global population. The increase is largely due to the proliferation of violent conflicts and climate-related shocks which are also major drivers of distress migration.

Madagascar President, Hery Martial Rakotoarimanana Rajaonarimampianina, whose country is facing the impacts of climate change, also spoke at the event.

“Young men and women are the most affected by (climate change-related) population displacements. If we want to change the paradigm of migration, we need to find solutions in the countries of origin,” he said.

FAO believes that migration should be a choice, not a necessity, and FAO is working with partners and communities around the world to give people back that choice.

Between 2008 and 2015, an average of 26.4 million people were displaced annually by climate or weather-related disasters alone. In total, there are currently an estimated 244 million international migrants, 40% more than in the year 2000. A large share of these migrants come from rural areas where more than three quarters of the world’s poor depend on agriculture and natural resource-based livelihoods.

These large movements of people present complex challenges that require humanitarian and development solutions. Many of the triggers that cause people to migrate can be addressed by investing in rural development, supporting decent rural employment and ensuring social safety nets. This work also contributes to achieving the Sustainable Development Goal of Zero Hunger by 2030.

“Inequalities and lack of opportunities in rural areas are a leading cause for the loss by communities of one of their most precious assets: their young people,” Houngbo said. “My plea on World Food Day 2017 is for continued investment in rural transformation so that millions of young people can build a better life for themselves.”

“The biggest problem we have today is war, man-made conflict. Eighty percent of the expenditure of WFP – over $6 billion – is in man-made conflict zones like Syria, like Iraq, like Somalia… We will never achieve Zero Hunger by 2030 until we end conflict,” Beasley said.

FAO celebrates World Food Day each year on 16 October to commemorate the founding of the Organisation in 1945. Events are organised in over 150 countries across the world, making it one of the most celebrated days of the UN calendar. These events promote worldwide awareness and action for those who suffer from hunger and for the need to ensure food security and nutritious diets for all.

The U.S. Food and Drug Administration (FDA) on Tuesday, July 7, 2020 authorised the marketing ...