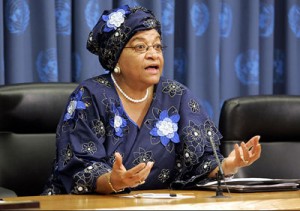 The percentage of land owned by women is disproportionately small considering their crucial contribution to agriculture and especially the food security of households and communities. The existing gender inequality in access to and control over natural resources is regarded as an obstacle to their sustainable management and to sustainable development in general.

The Universal Declaration of Human Rights stipulates that human rights apply equally to all, regardless of sex, yet women around the world are disproportionately affected by human rights violations, which keeps them trapped in poverty. Women have fewer benefits and protections under legal systems than men and are largely excluded from decision-making structures. Women also lack control of financial resources, have larger work burdens, and are more likely to suffer from social isolation and threats or acts of violence.

But this error is being addressed in the West African country of Liberia, where the authorities have embraced a call for equal protection to land, urged women to do more and “stand up and be accounted for.”

As honored guests at Liberia’s International Women’s Day Celebrations in Monrovia on Saturday, March 8, REFACOF and FCI presented a statement to President Sirleaf urging the President to include “clear safeguards and specifics on how women’s rights to own, access, use and control land would be recognised and protected” in Liberia’s New Land Law, currently being vetted by the country’s internal vetting committee. In an open statement to participants, REFACOF President Cécile Ndjebet stressed the importance of securing women’s rights to land and providing equal protection of these rights to enhancing women’s status and accelerating prosperity in Liberia and across Africa.

“For real political and social change to take place, there are three issues that need to be addressed, we need legislation that protects equal rights for women, mechanisms that provide for political and social equity, and a change in social and cultural perceptions of women,” said Ndjebet.

The recommendations presented were the outcomes of the Third Regional Workshop on Gender, Climate Change, Land and Forest Tenures in Africa, co-organised by REFACOF and FCI, with support from the Rights and Resources Initiative (RRI). The workshop convened women participants from 16 African countries, and included donors, development partners, and issue experts.

ALSO READ:  Finland may become first country in the world to ban coal

During the workshop, participants discussed the insecurity of women’s land protection in Liberia’s current land reform policy. Despite the promise made by President Sirleaf in an interview with Reuters last year, in which she stated that “women will have the full right to own their land like anyone else,” clear safeguards and specifics on how these rights would be realised in practice have yet to be included.

“We must remember that action is necessary and we need more than just promises,” said Solange Bandiaky-Badji, Africa Program Director for RRI.

In Liberia, land conflicts remain the single most explosive issue, which, if not adequately addressed, could undo years of progress. The requested policy provisions not only stand to prevent rollback, but provide a path forward in empowering women and enhancing their representation and participation in all aspects of life, not just in Liberia, but across Central and West Africa. Should REFACOF and FCI’s recommendation come to pass, they could propel land equality, and greater gender equality, across the region, in countries such as Cameroon, Cote d’Ivoire, Democratic Republic of the Congo, and Senegal, where land reform processes are just beginning.

To help demonstrate solidarity and apply pressure on President Sirleaf, REFACOF garnered international support through an online petition that gathered signatures from across the globe, in six continents.

As Guest of Honor Duncan-Cassel remarked, the Celebration not only marked a day “to celebrate acts of courage and determination by ordinary women who have played an extraordinary role in the history of women’s rights” but, to further empower Liberian women at home.

Secure rights to land are a necessary step in realizing equality. Not only do they enable women to combat poverty, provide food and income for their households, and protect themselves against domestic violence and the contraction of HIV/AIDs, they provide greater opportunities for women to become active participants in political and social processes.

“Women have to be there to play, and to be in to win. Women need to start with registration for transformation. If women want women’s representation, they need to put them there through their vote,” said President Sirleaf.

Julia Weah, Executive Director of FCI, reiterated the importance of the day’s events, stating: “These are critical moments in history for women in Liberia, a game-changing moment for women’s secure ownership rights to land, and we don’t want to miss it.”