Why Indigenous Peoples are central to climate action

August 11, 2016 Comments Off on Why Indigenous Peoples are central to climate action 1,105 Views

August 9 is International Day of the World’s Indigenous Peoples 2016, and is devoted to the right to education

Indigenous communities across the world have a key role to play in tackling climate change and in achieving the climate goals set out in the historic Paris Climate Change Agreement. Indigenous peoples not only have a right to education, they can educate other groups in sustainable life-styles. 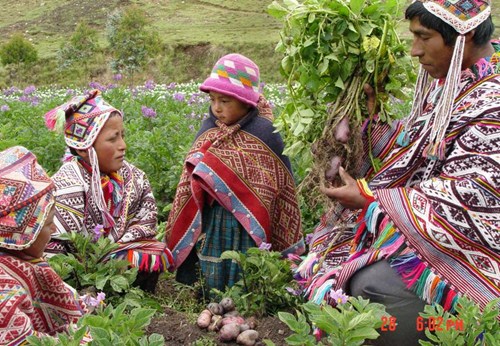 For indigenous peoples, resilience to climate change is rooted in traditional knowledge, and their capacity to adapt to environmental change is often based on in-depth understanding of the land.

As climate change increasingly impacts indigenous landscapes, communities are responding and adapting in unique ways. Others can learn from these best practices.

For example, the indigenous Quechua community in Parque de la Papa, Peru, maintain a Potato Park in the Andes with a bank that holds over 1,000 varieties of the vegetable.

Climate change is threatening biodiversity and forcing them to change centuries-old agricultural practices.

But having many types of potato crop which grow under harsh conditions, some of which can also be planted in other countries, constitutes an important form of resilience. Indigenous communities are increasingly offering their generations of traditional knowledge to further science. Knowledge about these and other best practices is discussed and shared by the Adaptation Committee of the UN Framework Convention on Climate Change.

Indigenous peoples who live near or in forests are also stewards of the world’s most valuable remaining ecosystems. These ecosystems are a source of food and water for millions of people, and at the same time they play a crucial role in regulating the climate and absorb vast amounts of carbon dioxide.

According to the UN Development Programme, approximately 70 million indigenous peoples depend on forests for their livelihoods and another 350 million rural people reside in or near them.

Indigenous land rights and education are a vital part of preserving these carbon stocks by reducing deforestation, managing forests sustainably and restoring tree cover as part of productive rural economies.

Indigenous peoples also have a powerful interest in sustainable, clean energy in order to preserve their life-styles.

UN University has been convening indigenous peoples to discuss how they can contribute to and build energy independence, notably with renewable energy.