Friday 14th August 2020
Friday, 14th of August 2020
Home / Cover / Why corruption allegations in NDDC must be investigated and culprits prosecuted

Concerned about recent revelations on the scale of corruption and mismanagement in the Niger Delta Development Commission (NDDC), a team of 30 civil society organisations based in the region want government to immediately dissolve the NDDC board, while thoroughly investigating the commission’s activities

We recall that the NDDC was established in 2000 as one of the first tasks of the new democratic government in Nigeria, and was conceived as a response to the agitations of the people of the region for greater benefits from the hydrocarbon resource exploitation, as well as responding to the dearth of development and basic social services in the region. It was established with the mission of facilitating the rapid, even and sustainable development of the Niger Delta into a region that is economically prosperous, socially stable, ecologically regenerative and politically peaceful.

The commission was also expected to identify factors inhibiting the development of the Niger Delta region and to assist member states in the formulation and implementation of policies to ensure sound and efficient management of the resources of the region.

Moreover, the NDDC was set up to tackle environmental problems that arise from the exploitation of oil mineral in the Niger Delta region and to advise the Federal Government and member states on the prevention and control of oil spillages, gas flaring and environmental pollution. To do this, the NDDC is expected to Liaise with the various oil mineral and gas prospecting and producing companies on all matters of pollution prevention and control.

Twenty years after its establishment, the Commission has consistently failed to live up to this clear mandate and has instead exposed the Niger Delta peoples to neglect and misery while bringing much scorn to the region.

While as civil society organisations we are perplexed and outraged by the gory tales of corruption in the Commission especially as it has been revealed by the National Assembly Probe Committee, we have long been aware of these happenings and have often called the attention of the federal government and the people of the region to the failures of the Commission.

Civil society organisations in the Niger Delta have embarked on project monitoring activities and written countless reports detailing the malfeasance in the Commission. The government has consistently refused to take action. All efforts to instil accountability and transparency in the NDDC has thus far lacked the support of successive governments.

We are saddened by the fact that, rather than develop the region, the huge allocations to the NDDC has rather bequeathed a legacy of abandonment, neglect and underdevelopment. Despite the huge yearly allocations to the Commission in the last 20 years, poor management and corruption has made it impossible for the agency to exert any reasonable measure of positive impact on the region.

To ensure we do not drift off in the sea of allegations, it is important not to lose sight of what the real issues are. We need to determine what factors that led to the level of reckless looting that has been associated with the Commission since its inception. We also need to develop strategies that will disincentivize stealing and mismanagement at the NDDC and ensure that the Commission lives up to its mandate.

It is important to note that the corruption in the NDDC thrives essentially because of political influence and patronage. Successive governments in Nigeria have treated the Commission as a conduit for settlement and compensation.

The decision as to who leads the NDDC at different points in time appears to have never been done based on track record, competence or any form of merit, but rather out of consideration for settlement. In this regard, the Presidency shares equally in the blame over what the Commission has become.

It is pertinent to note that the current Presidency has appointed at least five heads of the NDDC in a short period of five years, essentially contributing to the instability in the Commission.

While we welcome the probe of the National Assembly, we recall that this is not the first time the NDDC has been in the spotlight in this regard. There have been investigative processes previously that revealed alarming levels of corruption in the Commission. Unfortunately, those processes did not amount to any significant changes in the Commission, or even the prosecution of culprits. We are disturbed and genuinely concerned that the current hearing of the National Assembly Committee could end in the same manner, especially given the abrupt end of the public hearings.

As civil society organisations and the people of the region, we have documented all the allegations of corruption and abuse of due process in the Commission revealed at the public hearing. We will be closely monitoring the corresponding actions of all duty bearers in line with ensuring investigations and prosecution are carried out. This must not end in the manner other efforts ended.

To address the decay in NDDC and reposition the Commission to live to its expectation, we demand the following immediate actions:

The Niger Delta has become the prime example of a territory that has suffered virtually irreparable social and ecological damage. Many Niger Deltans have lost their lives in the struggle for the rescue of the region from utter destruction. It is unconscionable that a commission set up to ameliorate the situation has further added to the harm of the region. 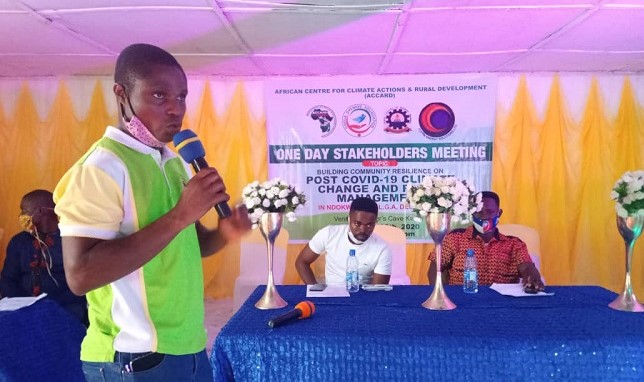 A non-governmental organisation (NGO), the African Centre for Climate Actions and Rural Development (ACCARD), has ...