We depend on private boreholes for water, residents of south-east states say

April 22, 2018 Comments Off on We depend on private boreholes for water, residents of south-east states say 1,656 Views

Many residents of Abia, Anambra, Ebonyi, Enugu and Imo states in the South-East geopolitical zone of Nigeria say they largely depend on private boreholes for their water supply. 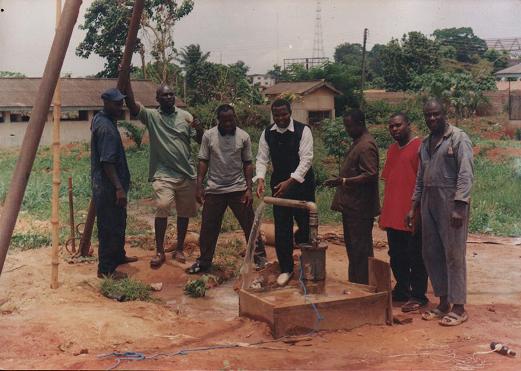 A private borehole in south-east Nigeria

They spoke in a recent nationwide survey conducted by News Agency of Nigeria (NAN).

Most of the respondents told NAN that the regional water schemes established by past state administrations in the region were no longer functional.

In Enugu State, however, the state government has expressed its determination to address the water-related challenges facing the citizens in urban and rural communities across the state.

NAN also reports that the Ministry of Water Resources got N185.78 million in the 2018 budget, while N75.5 million was allocated to Small Towns Water Supply and Sanitation Agency.

Dr Charles Egumgbe, the Enugu State Commissioner for Water Resources, told NAN that state government had made adequate provision for water supply and reticulation projects in the 2018 budget.

He said that when all the projects executed by the ministry and its agencies were completed, their impact on the water supply to the citizenry would be far-reaching.

“I am optimistic that the Enugu State’s 2018 Budget will address the water availability challenge in some parts of the state.

“The budget for water supply and reticulation in the state reflects Gov. Ifeanyi Ugwuanyi’s desire to execute people-oriented projects that will have much impact on the lives of the people.

“I urge all residents of the state to support the state government’s plans and programmes since they are all executed in their best interest,’’ Egumgbe said.

Nevertheless, tap water vendors have called on the state government to compel the state water board to supply water regularly at close intervals to facilitate their business.

One of the water vendors, Mrs Ngozi Chukwuani, a resident of Abakpa, said that the board only supplied water twice or thrice in a month.

“If there is no regular water supply, residents will have no other option than to fetch unhygienic water.

“We pay water bill every month; the bill is not fixed but it is costly, compared to the services which the water board renders,’’ she said.

“We have complained to the water board and I was asked to pay N2,000 for the problem to be rectified but it has not been fixed,’’ she said.

However, the Ebonyi Government said that it was addressing the perennial water shortage facing the residents of Abakaliki, the capital city, and other major towns across the state.

The Commissioner for Water Resources, Mrs Euphemia Nwali, told NAN that the completion of the repair and rehabilitation of Ezillo, Oferekpe and Ukaghwu waterworks had stimulated constant water supply in the state.

She said that the administration of Gov. David Umahi had effectively repositioned the water sector to meet the growing water needs of the residents by creating the Ministry of Water Resources in July 2015.

“The idea is to revamp the water sub-sector to achieve better results in water supply and administration of resources.

“The Ministry of Water Resources has taken over the duties of the State Water Corporation; the ministry is now the policymaking and implementing organ of government in the water sub-sector,’’ she said.

The commissioner, who did not disclose the yearly budgetary allocations to the ministry, however, noted that water supply and allied services in the state had improved considerably.

“Residents of the state now have regular access to clean and potable water for both domestic and commercial uses,’’ Nwali added.

Nevertheless, Dr Paul Okorie, a former General Manager of the defunct Ebonyi State Water Corporation, said that the state government had yet to fully address the water supply challenges facing the citizens of the state.

Okorie said that the bad policy on water management was definitely responsible for the prolonged absence of public water supply outlets in Ebonyi.

He stressed that the decision of the Umahi-administration to abolish the state water corporation was wrong.

He said that the supply, management and maintenance of the water infrastructure were the main responsibility of a state corporation or water board, adding that this had been the standard practice globally.

Okorie said that the creation of a ministry to replace the water corporation was a bad policy.

He said that the primary responsibility of a water resources ministry was policy formulation and the provision of an articulated roadmap that would facilitate efficient management of water resources.

He also condemned the handover of the multi-billion-naira Oferekpe Water Scheme to a private firm, saying that the policy would further worsen the water situation in the state.

In Imo State, the residents of Owerri said that they now totally relied on self-help water supply projects such as bore holes, following the concession of the management of Imo State Water Corporation in 2012.

All the same, residents of some states in the North-Central geopolitical zone were also facing water supply challenges because of factors such as erratic power supply, rusted pipes, equipment vandalism and poor finance, among others.

NAN, however, learnt that while water supply had improved in urban centres across Plateau, Nasarawa, Kogi, Benue, Benue and Niger states, most rural areas were still having water supply glitches.

“As a result, most of the waterworks in the state largely depend on power generating plants for power supply.

“The Lafia Waterworks, recently refurbished by the state government, has the capacity of producing 13 million gallons of water daily but it cannot produce at its maximum capacity due to poor electricity supply.

“Our power generating plants consume a drum of diesel per hour and we are expected to operate 24 hours a day.

Besides, Abdullahi-Agbo bemoaned the activities of some desperate consumers who break pipelines to siphon or channel water illegally to their houses or farms.

“The Mada Waterworks in Akwanga, for instance, is dedicated to residents of Keffi, Akwanga and the Army barracks in Keffi.

“Over time, however, some residents of the settlements along the pipe routes have broken the water pipes to connect water to their homes, farms and even car wash centres.

“The water is meant for human consumption but these intruders break the pipes to provide water for their animals, irrigate farms or wash cars; this is quite appalling,’’ he said.

The general manager, who noted that the culprits were highly placed individuals, vowed that the perpetrators of the act would soon be apprehended and prosecuted.

He said that the urban renewal programme of the state government, which entailed construction of new roads, had also affected the water pipeline network in some neighbourhoods.

He also said that Gov. Umaru Al-Makura had demonstrated great commitment to supplying adequate potable water to the citizens with the initiation of new water schemes and the refurbishment of existing ones.

In Plateau State, more than 340 boreholes have been sunk by Plateau State Water Board and Plateau Rural Water Supply and Sanitation Agency (PRUWASSA) via the support of the EU-UNICEF Project.

The Secretary to the State Government, Mr Rufus Bature, said that the boreholes were drilled in communities across the 17 local governments of the state.

He said that the state water board was able to procure assorted water treatment chemicals to enhance water supply, while the Ministry of Water Resources had introduced some policies to promote efficient water management.

He said that the policies included water and sanitation laws as well as monitoring and evaluation framework, while other measures were taken to protect water pipelines from vandalism.

The 2018 Budget of Plateau also indicated a strong commitment to boosting water supply, as N3.582 billion – 5.07 per cent of the total budget – was earmarked for water supply projects.

Details of the project indicated that N150 million would be expended on the acquisition of laboratory equipment, while N800 million would be spent on the expansion of water distribution pipeline network to improve water supply to the residents of Jos and Bukuru.

Other details showed that N170 million would be spent on rural water supply in Bokkos, while the Mangu Regional Water Supply Project (Phase 1 of the network distribution and pipelines scheme) would cost N600 million.

Bature said that N482 million was given to the Plateau Rural Water Supply and Sanitation Agency to improve water supply and sanitation in the state.

He said that the replacement of rusted pipes, which had been recognised as a major impediment to efficient water supply, was also taken care of in the 2018 budget.

He, nonetheless, urged the residents to protect the water pipes by making pragmatic efforts to curb the activities of vandals.