The Environmental Rights Action/Friends of the Earth Nigeria (ERA/FoEN) has urged the Federal and Lagos State governments to step on the brakes on adoption and implementation of World Bank-funded water schemes that seem tailored to meeting Nigerians’ water needs but are actually white elephant projects.

ERA/FoEN position is coming on the heels of the Federal Executive Council (FEC) approval of a 16-year water master plan which will see Nigeria’s Ministry of Water Resources partnering with the Japan International Agency to implement the project in three phases. 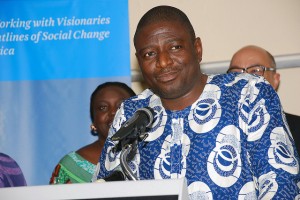 The first phase of the water masterplan would run from 2014 and 2020, while the second and third phases would run 2021 to 2025, and 2026 to 2030 respectively. The scheme will be due for review by 2030 and will provide the guidelines for private sector participation in the water sector under a Public Private Partnership (PPP) arrangement to fund the sector.

Water privatisation is also vigorously being pursued in Lagos by the World Bank’s private arm, the International Finance Corporation (IFC), the same institution that is said to have advised the Manila government, designed its water contracts, and then invested in one of the resulting water corporations. The IFC is currently acting in an official advisory capacity with the Lagos government.

Minister of Water Resources, Sarah Ochekpe, had said that the master plan, which acknowledged the inadequacy of government funding of the water sector, also proposed the commercialisation of water services to increase the revenue base of the sector for the maintenance of facilities and development of new ones.

In a statement issued in Lagos, ERA/FoEN described the master plan and World Bank-funded water schemes in Lagos as “merry-go-round” that will neither deliver on the scheme nor provide Nigerians needed water.

ERA/FoEN Director, Corporate Accountability, Akinbode Oluwafemi, said: “We are not only disturbed by the minister description of the PPP as a model for funding water supply; we are also worried that the Federal and Lagos governments have started implementing a model that has been tested and failed  in other climes”.

Oluwafemi regretted that the public hearing on the water sector bill held without adequate public sensitisation and critical stakeholder input, even as he explained that, “When something as fundamental as water is concerned, we must evaluate the explicit goals of each “stakeholder.” For us, improving people’s access to clean water is of paramount importance. The private sector sees it in another light. For them, it is profit motives first and this is counterproductive.”

The ERA/FoEN helmsman insisted, “PPPs in the water sector is privatization with a softer name. Aside from siphoning resources from the infrastructure investments that are direly needed, identified water PPPs around the world have time and again caused disaster for residents, including rate hikes, service cutoffs, poor water quality, worker layoffs, and corruption, among a long list of woes”.

Oluwafemi urged the Nigerian government to learn from the examples of Manila, in the Philippines, where results of a 1997 water PPP have been devastating. In Manila, in less than two decades, rates have increased more than 500 per cent, the workforce has been cut, and poor quality which has led to disease outbreaks and the corporations have broken their infrastructure promises.

The Environmental Rights Action/Friends of the Earth Nigeria (ERA/FoEN), an NGO, has described as a ...