Every day, Evelyn Nimusiima’s family uses at least three 20-litre jerry cans of water for domestic purposes. Yet, the last time they planted a tree in their village of Rwenshanku, Bubaare parish in Uganda’s southwestern district of Mbarara was four years ago. And, due to severe land shortage, they have extended their crop garden into a nearby wetland. 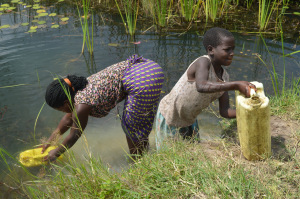 For a single jerry can of water that Evelyn draws from the shallow well, she does not know what it takes and how long it takes that same volume of water to be regenerated into the same well.

“We virtually never think about such things. All we want as a family is water,” says Evelyn, as she draws water from the shallow well, using a yellow plastic jerry can.

Evelyn Nimusiima and her sister fetch water from a well in Rwenshanku, Bubaare parish in Uganda’s southwestern district of Mbarara. Water availability and sustainability is dependent on the way catchment areas are managed and subsequently how surface water is recharging deeper into the soil so that it can be retained by the aquifers. And yet, most water users in developing countries seem not to know this.

Evelyn is one of the millions of people, companies, business entities, and organisations worldwide that abstracted water from water bodies such as wells, rivers, lakes and underground sources for various purposes but do not complement in recharging them. And yet, water availability and sustainability is dependent on the way catchment areas are managed and subsequently how surface water is recharging deeper into the soil so that it can be retained by the aquifers.

Jeconeous Musingwire, an environmental scientist with Uganda’s environment watchdog – NEMA, thinks this is partly the reason why such communities in Uganda, and the rest of developing countries, are facing water shortage problems.

Some 663 million people worldwide are living without an improved source of water according to the just released joint monitoring programme by the United Nations Children’s Fund (UNICEF) and World Health Organisation (WHO).

“Granaries of water such as wetland resources, tropical forests must be conserved,” notes Jeconeous, stressing that this is the best way to attain, “water sustainability.”

Contrary to this, wetland resources worldwide are being subjected to massive destruction.

In sub-Saharan Africa, many wetland resources have been converted into crop gardens. In southern Asia, they have been turned into plantations of oil palm.

In a country like Uganda, over cultivation, over abstraction of water for domestic use, overgrazing and industrialisation have seen wetland resources such as – marshes, swamps, peat bogs, river deltas, tundra, mangroves and river flood plains – perish. Such resources used to cover over 13 percent of the total area of the country but have now been reduced to just 11 percent.

Recently Uganda’s government vowed to cancel land titles issued in wetlands but this is yet to be implemented.

A few people, mostly women and children in Uganda – and in several developing countries who are the majority that fetch water- know how important it is to recharge the water bodies that give them water.

Professor Ephraim Kamuntu, Ugandan’s minister for water and environment, says this is a mindset problem.

“The problem is that people think water comes as rain, and rain comes from heaven and it is God given,” notes Prof. Ephraim. “Water users must create a balance between demand and supply. The needs should not overstretch the supply.”

Ian Atamba, the Director Integrated Actions Network, an NGO that works closely with farmers to conserve environment maintains that there is still room for change.

“People perish because of ignorance. It is important to sensitize water users on such issues and this is what our network is doing,” notes Ian. “With time water users will get to know that they cannot only extract water from environment. They need to contribute towards its realization.”