The Association of Waste Managers of Nigeria (AWAMN) has appealed to the Lagos Judiciary to approve the enforcement of the environmental laws in the customary courts.

President of AWAMN, Mr David Oriyomi, made the appeal during a meeting with the members of the Lagos Judiciary at the Lagos High Court, Ikeja.

Oriyomi prayed the Chief Justice of Lagos, Kazeem Alogba, to approve that the customary courts should begin the enforcement of the laws that prosecute environment defaulters.

He said that people now violate the laws, by indiscriminately dumping refuse without remorse across the state.

”Rainy season is coming and we see that in retrospect what Lagos always looks like during the season.

”Lagos is a coastal state, whenever there is rain, before you know it, our streets are flooded and, unfortunately, the people throw their refuse in the drainages without minding the consequences.

”We want to make sure that this does not happen this time around and as private people, there is no way we can enforce the sanitation practices outside the court.

”So we discussed with the Lagos State Waste Management Agency (LAWMA) as part of the executives and we called all the Environmental Sanitary Officers, we had a meeting with them and we saw that the judiciary was missing and that happens to be the arm of government that is saddle with that responsibility.

”So we wrote to the Chief Judge of the state to have a meeting with him, to make sure that there is collaboration between the executive as superintended in LAWMA, and the private companies to make sure that we have sanity come this rainy season,” Oriyomi said.

According to him, Lagos State generates more than 13,000 metric tonnes of refuse on daily basis because of the population and the population keeps increasing by the day.

”The people are very nonchalant, they just take their refuse, drop on the median, the drainages, on the highway, without feeling any remorse about it.

”And we have the laws as invested in the customary courts but these laws are not being exercised, they are just there.

”So our visit to the Chief Judge is to pray to him to allow the president of the customary courts to enforce this laws, so that people will desist from throwing refuse from their moving cars,” Oriyomi said.

He said that all had to be alive to their responsibilities to rescue the state from diets to enhance the health of the residents.

He urged people to have waste bins, to containerise or bag their refuse, so as not to deface the environment and bring diseases to the system.

Mr Ibrahim Odumboni, the Managing Director of LAWMA, said that the agency and the AWAMN had agreed on the minimum standard and the basic principle of operation that should be followed.

”And one side of that we saw a gap is the law, so we want them to be able to use the existed law to be able to support what we are actually doing in ensuring that Lagos is consistently clean,” Odumboni said. 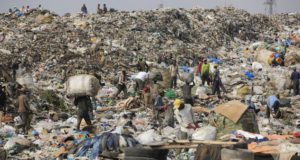