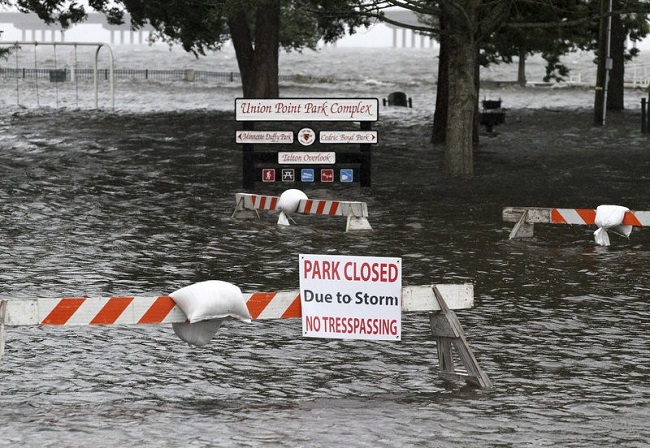 Hurricane Florence: Union Point Park flooded with rising water from the Neuse and Trent Rivers in New Bern, N.C., from the outer bands of the hurricane. Photo credit: NJ.com

The U.S. Department of Defense said about 7,000 troops were also deployed to respond to Florence in the coming days after it caused catastrophic flooding in North and South Carolina.

Florence’s centre was about 75 kilometre west-southwest of Wilmington, North Carolina, and about 45 kilometres northeast of Myrtle Beach, South Carolina, according to the National Hurricane Center.

“We have quite literally surrounded the affected area with (Defense Department) capability that will be critical in hours and days following the storm’s impact.

“Defense Secretary Jim Mattis’ guidance to me is clear: we are anticipating the needs.

“We are moving forward under our own authorities to be able to respond as soon as a request is made.

“Saving lives and mitigating suffering is a top priority and military forces are well-positioned to respond immediately, O’Shaughnessy said.

U.S. President Donald Trump had earlier directed FEMA and law enforcement to respond to the disaster and had commended their responses so far.

At least five persons have been killed as Florence, now downgraded from Hurricane to a tropical storm, continued to ‘wreak havoc’ on East Coast battering North Carolina and South Carolina.

Trump also tweeted to mourn those who died in the Hurricane: “Five deaths have been recorded thus far with regard to Hurricane Florence!

“Deepest sympathies and warmth go out to the families and friends of the victims. May God be with them!”