With the exception of Ted Cruz voters, most supporters of the Democratic and Republican candidates think global warming is happening, according to a recent national survey conducted by the George Mason University’s Centre for Climate Change Communication. 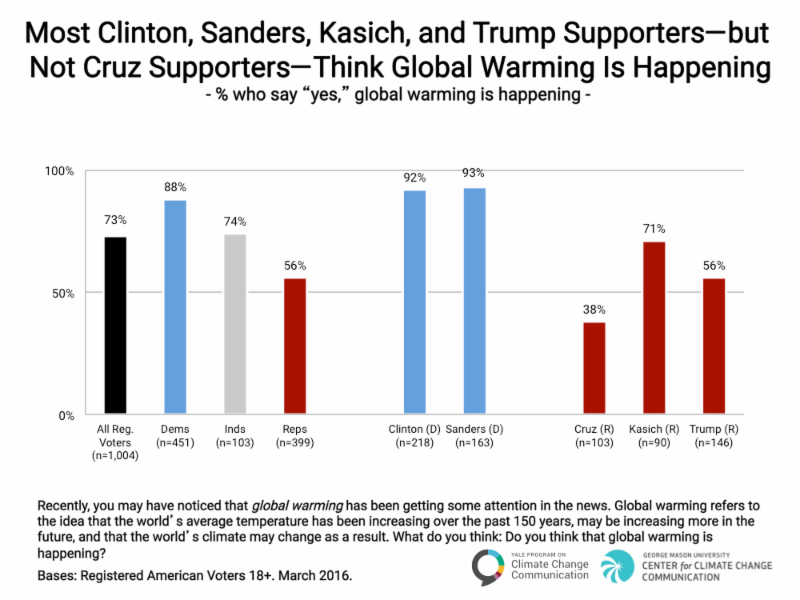 By contrast, fewer than half of Ted Cruz supporters – 38% – think global warming is happening. Now that Cruz has suspended his campaign – and Trump is the presumptive nominee – it will be interesting to see if Cruz backers decide to support Trump or sit this election out.

Registered voters support a broad array of energy policies, including many designed to reduce carbon pollution and dependence on fossil fuels, and to promote clean energy. The Democratic candidates’ backers are the most likely to strongly or somewhat support such policies, but backers of the Republican candidates do as well, including:

At least half the supporters of all candidates except Cruz would also support:

The report also provides the demographic characteristics of each candidate’s supporters. For example, Clinton supporters are more likely to be African-American, women, Catholics, and Baby Boomers than supporters of the other candidates.

Trump supporters are more likely to be white, male, Baby Boomers with a high school education.

According to the George Mason University, the report includes more results on how each candidate’s backers are similar to and different from one another demographically and on the issue of climate change.

The 27th session of the Conference of the Parties...

In his remarks at a stakeholder meeting organised by...