Three and a half year after the historic Urgenda-verdict by the The Hague district court, the Dutch judiciary, again, ruled in favour of Urgenda. The The Hague Court of Appeal affirmed the 2015 decision of the The Hague district court that the Dutch State violates its duty of care by not taking enough action to lower its CO2 emissions by 25% in 2020. The Court of Appeal even took it one step further by, this time, basing the duty of care on the human rights provision of article 2 and 8 of the European Convention of Human Rights. Femke Wijdekop writes. 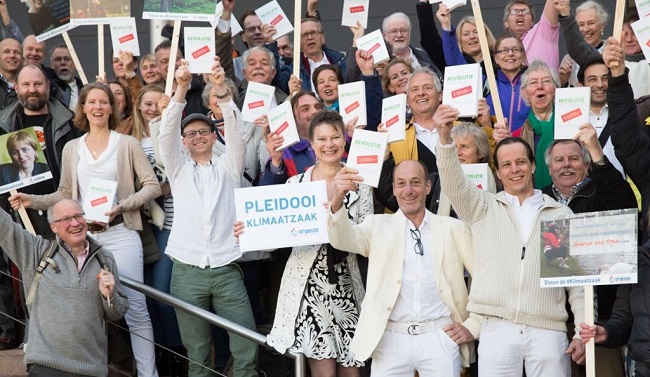 Celebration after the verdict

Three and a half years ago I was present at the court house, this time I watched the verdict via live-stream, with my own future generation playing on my lap. I was nervous and in my mind I joined the other co-litigants in the courtroom. However, soon after the chief-judge started reading the summary of the verdict – which, she warned, was elaborate and would take up to half an hour – I started to feel hopeful about the direction the verdict was going.

The next question was if the failure of the Dutch State to meet the goal of minimally 25% CO2 emissions by 2020 was tortious. The Court concluded that it was. Meeting this internationally agreed and scientifically based goal, in order to at least stay below global warming of 2 degrees celsius, requires the Dutch government to take speedy climate action. Delay of such action leads to even bigger risks of dangerous climate change.

Alternative pathways to reduce emissions presented by the State, such as CO2 capturing technologies, cannot (solely) be relied upon to reach the 25% goal. Also, the precautionary principle requires the State to take climate-action amidst the insecurity of the exact global warming and emissions-tipping points which lead to catastrophic climate change.

Next, the Court of Appeal rejected all the arguments of the State against the 2015-verdict. The verdict did not violate the separation of state powers since it is the duty of the judiciary to protect human rights which have direct effect in the Dutch legal order, such as articles 2 and 8 of the Convention. The order of the 2015 verdict to reduce CO2 emission with 25 % leaves the State with enough policy freedom in choosing the adequate measures to achieve this goal.

With other words, the State is left with enough manoeuvring space in fulfilling the obligations of the Convention (‘margin of appreciation’-doctrine). Also, the fact that the Dutch CO2 emissions form only a small part of the global emissions leading to dangerous climate change does not take away the responsibilities of the Netherlands to address its own share. (As a side-note, the chief-judge joked that ‘it would be too much to ask of Urgenda to start climate cases against all the other nations of the world’).

This all led to one conclusion: the State acted tortuously by not taking enough measures to reduce CO2 emissions according to its international obligations. The State thus violates its duty of care to protect Urgenda, its co-litigants and the Dutch populations from future human rights violations caused by dangerous climate change.

After the reading, sighs of relief and cheers sounded through the courtroom. Marjan Minnesma, CEO of Urgenda, in tears said she ‘could not have hoped for a better result’. I too felt cheerful and empowered, cheering in my living room which startled my baby and our animal companion. I felt empowered in my search to practice law from a personal values-driven place.  Many lawyers, including environmental lawyers, much to my surprise, had responded to the 2015-verdict in a ‘wait and see’, almost cynically, way. Many agreed with the objective of the climate case on a personal level, but professionally disagreed that the judiciary was the right place to enforce stricter climate policy.

This would violate the constitutional principle of the separation of state powers. The Court of Appeal today (October 9, 2018) showed that it could think beyond legalistic interpretations in order to honour its function as the protector of human rights while being rooted in the reality of our rapidly changing climate and ecology. Yes, the order to reduce CO2 emissions at a quicker pace would bring with it financial costs – the Court acknowledged – but these costs are the sacrifice we have to make to avoid much more serious ecological and social costs; harm both to human life and to nature and biodiversity.

Applause for the Court of Appeal for looking at the climate case through a wider lens and for bringing the human rights-dimension of government inaction so clearly into focus.