October 9, 2021 Comments Off on Unprecedented rise of heat and rainfall extremes in observational data 364 Views

A 90-fold increase in the frequency of monthly heat extremes in the past 10 years compared to 1951-1980 has been found by scientists in observation data.

Observational data refers to information gathered without the subject of the research having to be explicitly involved in recording what they are doing.

The scientists’ analysis reveals that so-called 3-sigma heat events, which deviate strongly from what is normal in a given region, now on average affect about 9 percent of all land area at any time.

Record daily rainfall events also increased in a non-linear way – on average, 1 in 4 rainfall records in the last decade can be attributed to climate change. Already today, extreme events linked to human-caused climate change are at unprecedented levels, the scientists say, and they must be expected to increase further.

“For extreme extremes, what we call 4-sigma-events that have been virtually absent before, we even see a roughly 1000-fold increase compared to the reference period. They affected about 3 percent of global land area in 2011-20 in any month,” says lead-author Alexander Robinson from Complutense University of Madrid, Spain, and Potsdam Institute for Climate Impact Research, Germany.

“This confirms previous findings, yet with ever-increasing numbers. We are seeing extremes now which are virtually impossible without the influence of global warming caused by greenhouse gas emissions from burning fossil fuels,” he adds.

The term “sigma” refers to what scientists call a standard deviation.

For example, 2020 brought prolonged heat waves to both Siberia and Australia, contributing to the emergence of devastating wildfires in both regions. Both events led to the declaration of a local state of emergency. Temperatures at life-threatening levels have hit parts of the US and Canada in 2021, reaching almost 50°C.

1 in 4 rainfall records is attributable to climate change

Daily rainfall records have also increased. Compared to what would have to be expected in a climate without global warming, the number of wet records increased by about 30 percent. This implies that 1 in 4 records is attributable to human-caused climate change. The physics background to this is the Clausius-Clapeyron relation, which states that air can hold 7 percent more moisture per degree Celsius of warming.

Importantly, already-dry regions such as western North America and South Africa have seen a reduction in rainfall records, while wet regions such as central and northern Europe have seen a strong increase. Generally, increasing rainfall extremes do not help to alleviate drought problems.

Comparing the new data with the already quite extreme previous decade of 2000-2010, the data show that the land area affected by heat extremes of the 3-sigma category roughly doubled. Those deviations which are so strong they have previously been essentially absent, the 4-sigma events, newly emerged in the observations. Rainfall records have increased a further 5 percentage points in the last decade. The seemingly small amount of warming in the past ten years, just 0.25°C, has thus pushed up climate extremes substantially.

“These data show that extremes are now far outside the historical experience. Extreme heat and extreme rainfall are increasing disproportionally,” says co-author Stefan Rahmstorf, from the Potsdam Institute for Climate Impact Research. “Our analysis confirms once again that for the impacts of global heating on us humans, every tenth of a degree matters.” 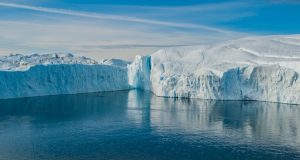 The major Atlantic ocean current, to which also the Gulf stream belongs, may have been ...