Following the commencement of rainy season in parts of Nigeria, the United Nations Children’s Fund (UNICEF) is sensitising stakeholders on the need to start early preparation against flood in the country. 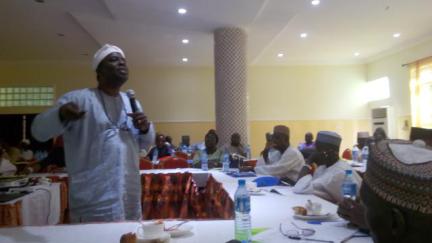 In 2015, hundreds of houses and lives were destroyed by floods that affected more than 10 states across the country. Thousands of people in both rural and urban communities were displaced by the floods.

A three-day Emergency and Preparedness Response workshop on Flood was organised recently by UNICEF for emergency preparedness stakeholders in 13 states in the Northern part of the country plus the Federal Capital Territory (FCT) and media practitioners.

UNICEF Emergency Specialist, Olusoji Adeniyi, stressed the need for people to ‎start emergency preparedness in their homes, saying the rains are here and the floods are going to come whether people like it or not.

He explained that emergency preparedness and response is everybody’s business, adding: “If we prepare, we are likely to have better chance of responding appropriately.”

“So, if you know you are living in a place that was flooded before, this is the time you should know that it’s likely to flood again and you should have a Plan B of when you need to relocate to higher ground or to clear your drains. Make sure that sufficient provisions are made for the water to flow away rather than flow into your apartment, if your environment is clean and the drains are well taken care of you are likely not to suffer flood,” he said.

‎in his remarks, Media and External Relations Officer, UNICEF Kaduna, Rabiu Musa, who delivered a paper on “Media Engagement in Emergencies”, noted that emergencies are facts which is part of people’s daily lives and as such must be prepared for, addressed and responded appropriately and timely too.

He sought the cooperation of the media which he said has a greater role to play in sensitising the public on emergency response.

Rabiu called on the media to continue to deliver on positive reportage in constantly educating and informing the people on issues of emergencies and to also respect people’s privacy especially when it concerns children and women.

The Edo State Emergency Management Agency (SEMA) says it has made adequate arrangements to mitigate ...