Seventeen years of long and arduous negotiations later, peasants and other people working in rural areas are only a step away from having a UN Declaration that could defend and protect their rights to land, seeds, biodiversity, local markets and a lot more. 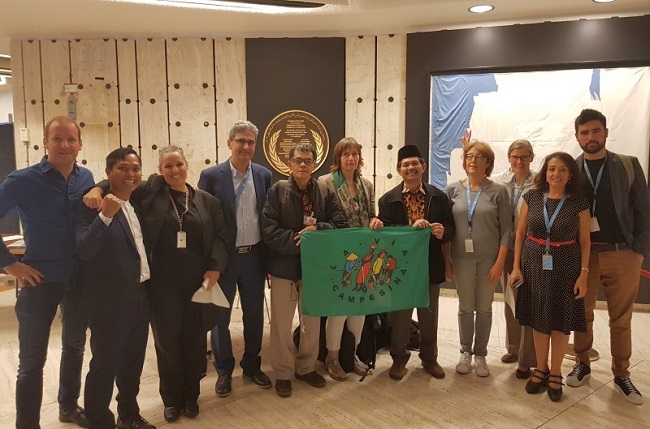 Members of the La Via Campesina in a group photo

On Friday, September 28, 2018 in a commendable show of solidarity and political will, member nations of United Nations Human Rights Council passed a resolution concluding the UN Declaration for the Rights of Peasants and Other People Working in Rural Areas. The resolution was passed with 33 votes in favour, 11 abstentions and three against.

The declaration now goes before the upcoming 3rd Committee session at UN General Assembly in New York in October. From there, in November 2018, the Declaration will be up for voting and adoption by all Member States of the United Nations. Once adopted, the UN Declaration will become a powerful tool for peasants and other people working in rural areas to seek justice and favourable national policies around food, agriculture, seeds and land keeping in mind the interests of millions of rural food producers comprising all genders and youth.

After several rounds of international consultation process, La Via Campesina – a global movement of peasants, indigenous people, pastoralists and migrant workers – adopted in 2008 a Declaration of Rights of Peasants – Women and Men. With the support of civil society groups like CETIM and FIAN International, La Via Campesina presented this proposal to the Human Rights Council in 2008.

“This has been a long tough path but as peasants, as people who have seen the worst of poverty and neglect, we are tough too and we never give up,” says Elizabeth Mpofu, the General Coordinator of La Via Campesina.

Observers say that peasants and others working in rural areas have insufficient recourse in the face of the discrimination they suffer and the other challenges they confront when seeking an adequate standard of living when subjected to forced displacement and marginalisation. However, with this win in Geneva, they believe that peasants a step closer to getting their rights recognised and protected.

According to Elizabeth, “This includes the right to life and adequate standards of living, the right to land, to seeds, to information, justice and equality between women and men” For her, it is a turning point for peasant struggles around the world. “Today, we are just a step away from acceptance by all member nations of the United Nations.” She added.

This UN Declaration can provide a global framework for national legislation and policies to:

“While all of the member states said they are committed to human rights for all, the no votes and also abstentions are abysmal,” says Ramona Duminicioiu from Via Campesina Europe. “The nos and abstentions mean that these countries are not up to the protection of human rights of peasants and rural populations. They are against a bigger picture: eradication of poverty, food sovereignty, and the effort to reduce inequalities,” lamented Ramona.

“Once the resolution is adopted at the UN General Assembly in New York, we will take the message of the Declaration to our people back home and elaborate its significance and how it could strengthen our struggles against privatisation, criminalisation and more. The more we educate and inform our people back home, the stronger our movements become. It will enable us to demand better policies and laws that will consider the rural realities of the developing world,” added Henry.

“At this point, despite producing the bulk of the food we eat – peasants are subjected to extreme forms of violence. Those who resist are either murdered or arrested. This criminalisation of peasant struggles has to stop, and this Declaration is a step forward in that direction,” says Diego from Movimiento Nacional Campesino Indígena (MNCI) Argentina CLOC-Vía Campesina.

Observers contend that the adoption of such a Declaration and the recognition of rights contained in the proposed legal instrument can contribute to better protect the rights of peasants and improve livelihoods in rural areas in the long term and at the global level. It will, according to them, fill existing normative gaps in protection and should also be forward-looking to deal with emerging gaps and thus end discriminatory practices by giving them more visibility and coherence.