U.S. President Donald Trump’s withdrawal from the Paris Agreement on climate change puts the United States at odds not just with the international community, but with overwhelming scientific evidence and the publicly expressed wishes of hundreds of American companies, from Apple to Exxon. 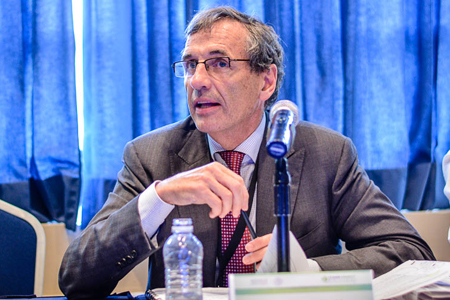 These are part of sentiments expressed by Scott Vaughan, President and CEO of International Institute for Sustainable Development (IISD).

According to him, without the United States, the rest of the world will have a harder time meeting the Paris Agreement’s goal of preventing global temperatures from rising more than 2 degrees Celsius above pre-industrial levels. “And the United States will miss out on the creation of more jobs and economic growth as well as reduced business risks,” he adds.

His words: “While we are deeply disappointed by this ill-informed decision, we are also heartened by the immediate response from other major countries determined to proceed with climate action. India, the European Union and China pledged to accelerate their efforts. Canada announced it will co-host a ministerial summit with China and the European Union in September to advance action on the Paris Agreement.

“Even more importantly, new coalitions of states, cities and businesses within the United States have emerged in defiance of the president’s decision.

“Governors from California, New York and across the country declared they would work together to move ahead with climate action. Yesterday, 83 mayors signed a statement vowing to uphold the commitments to the goals enshrined in the Paris Agreement.

“And finally, U.S. businesses have expressed their frustration and disappointment with the decision, but also stressed that it would have little impact on their own ongoing efforts. Brad Smith, CEO of Microsoft, said this about the Paris Agreement: “A global framework strengthens competitiveness for American businesses. It creates new markets for innovative clean technologies, from green power to smart grids to cloud-enabled solutions.”

“At IISD we will continue to work across the world and in the United States at every level of government to help implement climate action.

“We echo the words of the 83 U.S. mayors who committed to adopting and upholding the Paris Climate Agreement goals: ‘The world cannot wait—and neither will we’.”

Ibrahim Usman Jibril, Nigeria’s Environment Minister of State, said: “Despite the pulling out of the United States from the Paris Agreement, I want to state categorically that Nigeria joined the Paris Agreement as a Sovereign Country taking into account its national circumstances and convection in a global approach to tackle climate change.

“Nigeria is committed to the provisions of the Paris agreement as it is in accordance with its National interest.”

The Least Developed Countries (LDC) group, representing nearly one billion people in the 48 poorest countries in the world, in a reaction, has expressed disappointment in the decision, but emphasised that global climate momentum will continue with or without the US.

Chair of the LDC group, Mr. Gebru Jember Endalew, said: “It is deeply disappointing to see the US shirking its responsibilities as a member of the global community. We are already seeing the impacts of climate change with record droughts, flooding and heat waves recently faced around the world. For LDCs the impacts are especially devastating; as the poorest countries in the world we are highly vulnerable but the least capable to respond to the threat of climate change. By refusing to commit to ambitious action on climate change President Trump is showing disregard for the lives of millions around the world.

“In Paris the world united with a call for climate action and the wave of momentum now behind the Agreement cannot be slowed by one country deciding to sit on the sidelines. Many countries have taken up the mantle of global climate leadership through ambitious climate policies and innovation, and the US has lost a seat at this table.

“The international community won’t wait for the US to catch up. Transformations in technology, consumption patterns and demand for clean, green innovations are charging ahead of political will around the world. Countries are learning that taking advantage of these innovations is not only smart for the climate, but smart for the economy. Joining the transition to a green economy means embracing business opportunities that are beneficial for all.

“The US is only one country. I urge global leaders not to let President Trump’s decision to distract us from the important work we need to do to achieve the vital goals enshrined in the Paris Agreement. I also invite President Trump to reconsider his decision. Let us continue to work together to build a safe world for present and future generations.”