June 2, 2017 Comments Off on Climate justice must be prioritised, say faith-based groups 810 Views

The ACT Alliance, the Lutheran World Federation and the World Council of Churches, have called for a prioritisation of climate justice as US President Donald Trump on Thursday, June 1, 2017 issued executive order withdrawing the US from the Paris Climate Agreement.  They express deep dismay at the development, which they believe goes against global commitments to address climate change. 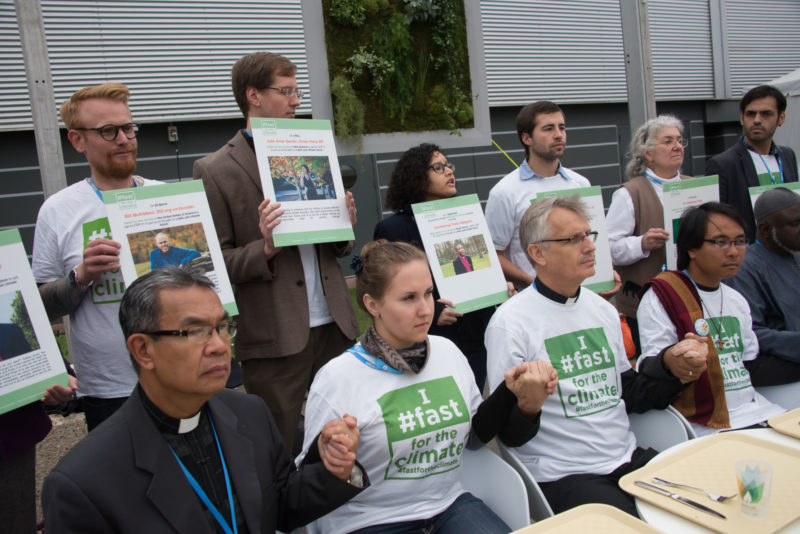 An interfaith group of religious leaders sits in front of empty trays during a public action at COP21 in Paris in 2015. Photo credit: Ryan Rodrick Beiler/LWF

The three faith-based bodies, it was gathered, actively contributed to the development of the Paris agreement, and welcomed its outcomes and the commitments of the nations of the world to it.

“Only 18 months ago global leaders welcomed the landmark Paris Climate Agreement for taking into account the immediate needs of countries most severely affected by the impacts of climate change. The move by the President of the United States flies in the face of ethics and Christian values,” says Rudelmar Bueno De Faria, ACT Alliance General Secretary.

“Addressing climate change equals protecting human beings, their workplaces and the economies of the world. The LWF will continue to promote climate justice, as an issue of intergenerational justice, in the conviction that creation is not for sale,” says Martin Junge, LWF General Secretary.

“This is a tragedy, missing an opportunity to show real, accountable leadership for the future of humanity and our common home. This is a decision that is not morally sustainable – and not economically sustainable either. The struggle for climate justice has to continue,” says Olav Fykse Tveit, WCC General Secretary.

As global temperatures continue to rise, severe floods, droughts and superstorms are becoming more and more commonplace. It is the most vulnerable people who are hit first.

The poorest countries will be hit twice more: first by unwillingness to curb US carbon emissions, and then by a planned decrease in climate finance to support people in adapting to the impacts of climate change and towards a transition to clean energy for poor countries.

The implementation of the Paris agreement is the only way for the human family to turn away from the threat of global warming. The ACT Alliance, the Lutheran World Federation and the World Council of Churches affirm their commitment to climate justice and call on the nations of the world to stand by the commitments of the Paris Agreement.

ACT Alliance is a global alliance of 143 churches and related organisations working together in over 100 countries to create positive and sustainable change in the lives of poor and marginalised people.