The Nigeria Extractive Industries Transparency Initiative (NEITI) has called on the Federal Government to revisit and re-valuate the transfer of the Federation oil assets by the Nigeria National Petroleum Corporation (NNPC) to its subsidiary – the Nigeria Petroleum Development Company (NPDC).

Executive Secretary of NEITI, Waziri Adio, made the call while answering questions from newsmen on the highlights of the recently released NEITI Policy Brief entitled “Unremitted funds, oil sector reforms and economic recovery”.

Mr. Adio stated that the review has become imperative in view of the under-valuation, non-payment for the assets and the inability of the NPDC to either make returns on the investments or be accountable to the federation over its management of Nigeria’s oil assets in its custody.

The NEITI Policy Brief has put the total unremitted revenues to the federation by the NPDC at about $5.5 billion and another N72.4 billion as shown below:

Summary of Outstanding Remittances to Federation Account by NPDC

NEITI IN THE Policy Brief also observed that beyond the issue of unremitted monies, there are issues of transparency and efficiency with the operations of NPDC noting that, ‘‘since 2005, NNPC has transferred 16 OMLs to NPDC. However, the process of transfer of these assets raises serious questions, as there appears to be no clear-cut criteria for transfer of oil mining assets to NPDC. The process for the transfer of Federation’s assets to NPDC does not seem to pass the transparency test. One of the upshots of this is the undervaluation of these assets, thereby depriving the Federation of optimal value for the assets’’.

The undervaluation NEITI reported, results from NNPCs divestment of its 55% shares in the Shell Joint Venture which it valued at $1.8 billion. PricewaterhouseCoopers’ (PwC) valuation of the same assets was $3.4 billion. In addition, four other assets were divested in 2012 by NNPC to NPDC under the NAOC JV which the DPR valued at $2.225Billion. NPDC is contesting these valuations even though it currently operates these 12 OMLs without paying in full, the undervalued rates (Paid only a $100 million) nor the new figures arrived at by PwC and the DPR. In total, the non-payment for the 12 oil blocks by NPDC sums up to $3.925 billion.

NEITI questioned the situation where NPDC deliberately refuses to be accountable in its management of Nigeria’s oil assets entrusted in its care.

“NPDC continues to be unaccountable to state institutions and the laws of the country. NPDC has consistently declined to give account of its operations and its management of national oil assets in its possession. NPDC failed to cooperate with the forensic audit ordered by the Auditor-General of the Federation in 2015. Similarly, the company failed to cooperate with NEITI for five audit cycles and only partially cooperated during the 2013 and 2014 audits’’.

The transparency agency stated: “The lack of technical know-how has been evident since the mid-2000s when the NPDC started engaging in service contracts with international oil companies. Also, NPDC’s lack of finances has been evident since the beginning of the 2010s, when the company resorted to Strategic Alliance Agreements (SAAs) with indigenous oil companies to carry out production on the fields in its possession.”

NEITI maintained that if NPDC was established to foster indigenous participation in the upstream sector, the Company has not in the past three decades, demonstrated ability to either maximise its production capacity or show that it has the financial muscle to operate independently.

“In mid-2006, total output from its wholly owned production was just 10,000 bpd. On the other hand, production from its service contract agreement with Agip was 65,000 bpd. Despite NPDC’s clear operational and capacity deficiencies, the company continues to be allocated valuable concessions of Nigeria’s most productive OMLs.”

The NEITI boss concluded that the call on the FGN to revisit and re-valuate the divestments of Nigeria’s oil assets at a time the country is passing through very difficult economic challenges is therefore appropriate and timely. 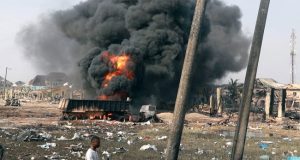 The Nigeria Extractive Industries Transparency Initiative (NEITI) has called for the transfer of all the ...