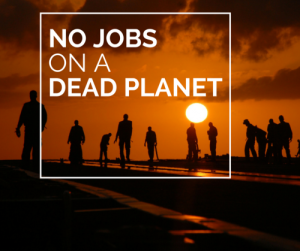 Can the need to protect the environment be reconciled with the desire to safeguard jobs? Labor markets will shift to fit the demands of a greener economy as resources shrink and the climate changes. But with 38 percent of workers worldwide employed in carbon-intensive sectors like fossil fuel extraction and industrial manufacturing, this transition will be challenging. In State of the World 2014, contributing authors Judith Gouverneur and Nina Netzer point to the central role of trade unions in building a “just transition” toward a greener economy.

Through the coming social and ecological transition, some jobs will be shifted or redefined to fit the new economy, such as moving from fossil fuels to renewables. Other jobs, however-such as those in the coal sector-will be lost or displaced to countries with laxer constraints on greenhouse gas emissions. A badly managed transition could have disastrous consequences on employment.

“In modern societies, work is at the centre of the relationship between nature and society…. Achieving sustainable ways of living is therefore inextricably linked to the way we decide to organize work in the future,” write Gouverneur and Netzer. “Parts of the trade union movement, as well as some individual unions, have accepted the reality that they need to become active participants in the transition toward sustainability.”

To address the transition challenge, some trade unions have proposed a “just transition,” a concept coined in the 1990s that strengthens the view that environmental and social policies can reinforce each other. Using this approach, unions promote the employment potential of a green economy through innovation and technology as well as through resource efficiency.

Yet trade unions remain reluctant to step in as the main driver of the green transformation. And they often neglect the need to shift lifestyles and businesses away from the excessive use of goods, resources, and energy.

“This is understandable insofar as the trade union movement, with its traditional goals of advancing worker interests, is deeply anchored within an economic system that bases wealth generation on continuous growth of production and consumption,” write Gouverneur and Netzer.

But there are potential solutions. Lars Henriksson, a Swedish autoworker and political activist, suggests that unions aim not to preserve unsustainable industries in the name of employment, but to engage workers in developing sustainable conversion strategies. In 2009, for example, union representatives united with environmentalists, researchers, and citizen’s groups to develop a sustainable transport plan in Europe after facing railroad privatization. Unions can also help to secure equitable redistribution of work by requiring continuing education and training, adapting existing social protection systems, and regulating staffing and wage agreements.

Trade unions have a central role in ensuring that the transition moves beyond a “jobs versus environment” debate and enables a shift to workers being drivers of change, rather than victims.

Worldwatch’s State of the World 2014 investigates the broad concept of “governance” for sustainability, including action by national governments, international organizations, and local communities. 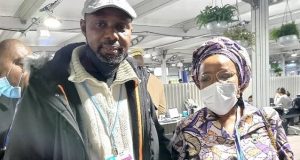 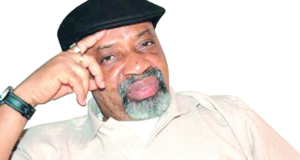 The Intergenerational Equity and Innovation (Youth) thematic group of the Nigeria Civil Society Framework on ...