October 25, 2020 Comments Off on Thousands evacuated as Philippines braces for 17th typhoon 447 Views

The Philippines on Sunday, October 25, 2020 braced for a typhoon, barreling toward its eastern coast, forcing thousands to evacuate amid warnings of flash floods and storm surges.

The weather bureau said typhoon Molave was packing maximum sustained winds of 130km per hour (kph) and gusts of up to 160 kph as it moved west at a speed of 25 kph.

It added that it was expected to make landfall between the eastern provinces of Albay and Camarines Sur on Sunday night.

Tropical cyclone alert warnings were raised for more than 20 eastern and central provinces, including the capital region of Metro Manila.

The weather bureau warned that “flooding, including flash floods, rain-induced landslides and sediment-laden streamflows may occur during heavy or prolonged rainfall.’’

It added that storm surges of up to 2 metres may affect coastal areas in the eastern region of Bicol as well as the provinces of Northern Samar and Quezon.

Local officials also said in the province of Albay, some 3,500 residents living at the foot of Mayon Volcano were evacuated ahead of the typhoon’s landfall.

Some of the areas being threatened by Molave were still reeling from floods caused by tropical storm Saudel, which left at least one dead and more than 165,000 displaced.

Molave is the 17th tropical cyclone to hit the Philippines this year. The country is battered by an average of 20 cyclones every year.

One of the strongest in recent memory, Typhoon Haiyan, hit the country in November 2013, killing more than 6,300 people and displacing more than 4 million. 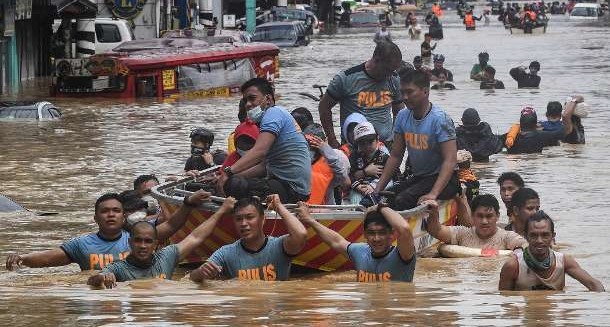 Typhoon Vamco blew out of the Philippines on Friday, November 13, 2020, leaving behind at ...