The vulture decline: Hazard on human health and economy

March 14, 2018 Comments Off on The vulture decline: Hazard on human health and economy 1,208 Views

The decline of vultures in Nigeria should be everyone’s concern if we understand and appreciate their importance or contributions to human health and the economy. This decline in the number of vultures is not only exacerbated by natural or climate-induced changes but chiefly driven by human-induced threat associated to belief-based use. 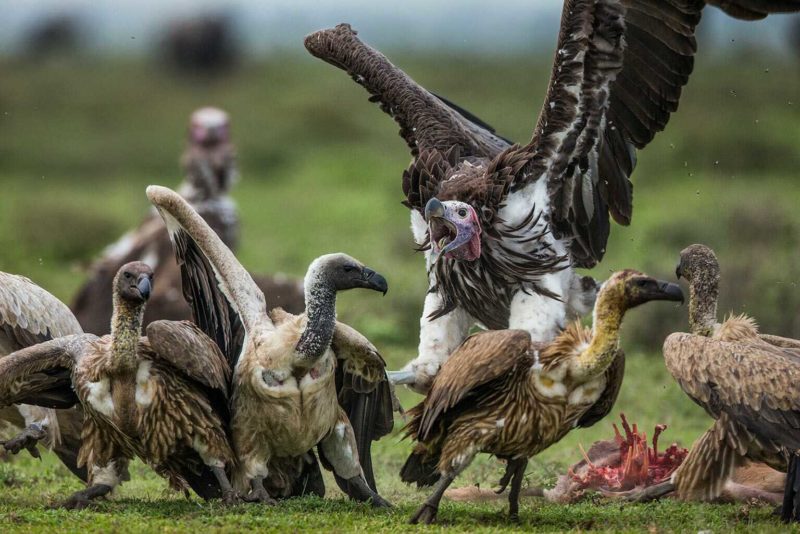 Vultures fighting over an animal carcass

Having this in mind, effort at reducing this threat associated with the 15 African-Eurasian vulture species faced with different level of conservation threat therefore needs a multi-prong approach. This approaches must combine actions on advocacy, sensitisation, policy review and capacity strengthen etc by concerned stakeholders including NGOs.

The Nigerian Conservation Foundation (NCF) Save Vulture Advocacy campaign commenced with a public lecture in 2017  using the 15th Chief S. L. Edu Memorial Lecture with the theme “Decline of Vultures: Consequences to Human Health and the Economy” delivered by the Deputy Secretary General to the United Nations, Ms. Amina J. Mohammed.

Attention is being devoted to vultures because of the alarming rate of their decline. Threats to vulture species are from humans. Vultures today are in dire situation especially outside conservation areas. They are in danger of being poisoned, especially through the deliberate poisoning of carnivores; electrocution by powerlines passing through breeding sites, direct persecution and declining food availability. Deliberate poisoning of carnivores is likely the most widespread cause of vulture poisoning. Human persecution of vultures has occurred for centuries and continues unabated. These are all human-induced threats! Among the 15 species of the African-Eurasian Vulture (with ranges across Africa, Asia, and Europe) eight species are Critically Endangered; three are Endangered; and three are Near Threatened.

Vultures play a crucial role to human health and the economy. They keep our environment free of carcasses and waste thereby restricting the spread of diseases such as anthrax and botulism etc. They are of cultural value to the Nigerian communities. They have important eco-tourism (bird watching) value. Vultures are nature’s most successful scavengers, and they provide an array of ecological, economic, and cultural services. As the only known obligate scavengers, vultures are uniquely adapted to a scavenging lifestyle. Vultures’ unique adaptations include soaring flight, keen eyesight, high sense of smell and an immune system adapted to degrading carcasses with no negative effect.

Vulture decline would allow other scavengers not properly equipped for scavenging to flourish leading to their proliferation causing bacteria and viruses from carcasses into human cities. We need to rise and prevent this from manifesting.

Vultures in Nigeriaare ignorantly considered an omen of evil, therefore, the evil must be stopped. This leads many to kill vultures in the quest for averting supposedly eminent evil. Sad to know this barbaric act still exists.

In 2017, the NCF conducted a survey to wildlife markets in Ondo, Osun and Ogun states in South West Nigeria which revealed that Kano, Ibadan and Ikare are the hubs of vulture sales. Wildlife and herbs sellers visit these trade hubs to get vultures (live or dead) for their customers and users.

Vultures, it was gathered, are being used by the belief-based practitioners and other spiritualists for “Awure” – fortune charm. The survey revealed that a vulture head goes for between N12,000 and N15,000 at retail markets, a feather costs N100, while other parts cost between N500 and N2,000. The findings further showed that although a whole vulture could cost as high as N20,000 to N30,000, once the head is off, the rest of the parts may not attract much money.

Belief-based use is a major driver of vulture decline in Nigeria especially in the South West where they were assessed to be major ingredients in traditional concoction. The local markets for vulture species have soared up in multi-folds as a result of continued demand within the belief-based system. Belief-based professionals who are the users of this economically important species are currently decrying the high price of this commodity as it affects their business. However, there is a need for a change in the traditional belief system that has entrenched the cultural cocoon of the day-to-day existence of people. In trying to change this belief-based use, in 2017 NCF organised a Stakeholders’ Workshop on Illegal Wildlife Trade tagged “Save Vulture” in Ogun, Ondo, and Osun states where about 150 people participated drawn from Traditional Healers Association, Enforcement and Border Control Agencies, Wildlife Traders, Transport Union, Government MDAs (in Justice, Environment, and Forestry) and Wildlife Research Institutions .  While this workshop was an eye-opening awareness for practitioners within the illegal wildlife trade in Nigeria.

The economy of a nation or of a people is not built by trading in commodity and other allied items only, but also on a healthy environment. When an environment is healthy by ensuring that all the components are functioning properly, people are healthy and trade successfully, which has a ripple effect of imparting directly on the nation’s economy. A healthy soul is a wealthy soul and a healthy people is a healthy nation.

People need to be aware of the services vultures provide to humanity and take actions in tackling the challenges faced by vultures. Researchers need to establish a simple monitoring network for vultures. Toxic drugs that are harmful to vultures need to be eliminated. Time to save the vultures from vanishing is now! Time to be more aware of the happenings in our environment is now! And time to take bold steps to further save nature is now!