A fabrication by a roadside technician who fixes cars and motorcycles’ electric fittings may very well be the solution to an enduring use of generators in Nigeria. The country is riddled with generators usage from homesteads to business offices, shops and even government offices. This is not without certain clear and present dangers especially as it regards human health, the economy and the environment which, it seems, many users of generators are unaware of.

A prototype of the device

When this writer encountered with Christopher Chinedu Okorie, a 19-year-old electrician who works at Innoma Auto Electrical in Makurdi, Benue State, for about five years that he invented a generator that operates on battery and not fuel, doubt and disbelief almost set in.

However, when he made available the prototype generator, it became glaring that the invention, if and when properly harnessed, could considerably enhance power generation and usage in the country.

Incidentally, Chinedu is not educated and holds only a primary school leaving certificate. But that did not deter his initiative to devise a concept to aid in power generation purely with the desire to cut down the cost of running a generator on fuel.

Asked how he got the idea, Chinedu said he was just thinking of how to use other means rather than fuel to generate power when the wonderful idea came to him. According to him, his constant work with batteries as he charges them for both cars and motorcycles drew his thought to their ability to run a generator motor and armature to produce electricity.

This invention, although yet to go through the testing of professional electrical engineers, has the prospects of being in the fore front in the campaign to mitigate the impact of climate change generating electricity in a safe, convenient and clean way.

Due to the epileptic power supply situation in the country, generators have become a must-have and no business thrives without the use of one. This puts a strain on the economy as so much money is put into buying fuel even in the face of increasing prices of petroleum products.

Statistics have shown that, from 1999 to date, over N244.5 trillion has been sunk into the Nigerian power sector for generation and distribution of electricity to no appreciable improvement. The situation has given impetus to the massive importation of generators which are mostly not environmentally friendly. This situation sets in because generators which have two-stroke engines powered by a mixture of petrol or diesel and oil do not burn the fuel efficiently.

More so, constant fuel generator use has continued to expose humans to fumes which are very harmful and cases of people dying as a result of generator pollution abound. The fumes affect lungs and cause lasting health problems such as cancer, premature birth, low weight babies and childbirth complications (neo-natal jaundice and cerebral palsy).

So to say, generator fumes which have carbon monoxide, a noxious gas with particles that pollute the air and, mixed with water when it rains, makes it acidic and a delayed-action killer to those who consume rain water.

Generators have also been known to make noise and, for the big ones, they cause cracks in walls. The loud endless noise emitted by generators that run on fuel is capable of noise pollution and prolonged exposure to it is likely to cause loss of hearing when the noise exceeds 70 decibels

On the other hand, green house gas (GHG) from generator can act as an agent in accelerating the incidence of global warming and climate change which have become a big scare worldwide.

Christopher’s electric generator, an invention capable of addressing the major problems of the generator, may have come to the rescue. As simple as the set is, the prospects for its efficiency is high.

He outlined that he made the prototype of the electric generator using the engine of a portable fuel generator commonly known as “I pass my neighbour” with a motor. According to Christopher, he used a more powerful motor to pair with the generator engine which gave him 8-point power output which is enough to run two television sets, a clipper, a radio, and light point.

“If you want it to carry more, you will increase the capacity of the motor and battery then. If it is a big generator, it will be 20 points and can carry television, pressing iron, fridge and water pump,” he explained.

Commenting on the cost of producing an electric generator, the electrician said he can make an 8-point generating set for N45,000. Queried on the high cost in comparison to a similar type that runs on fuel which sells around N15, 000 in the open market, Christopher said he is incapable of producing the sets now at a cheap rate unless he gets help from the government or other corporate bodies or manufacturers which will subsidise the cost.

Stressing further, Christopher, who enthused that his invention would help the society by reducing the noise of generators as well as stopping the constant use of fuel, made a passionate appeal for support from any quarters in order to go to school.

Although without a secondary school education, the teenage Christopher Chinedu Okorie may be on the threshold of history with his ingenious electric generator invention to usher in a green economy in Nigeria.

Previous: WaterAid: 210 million more Africans lack access to sanitation than in 1990
Next: Social media and creative technologies: A recipe to save Bagega 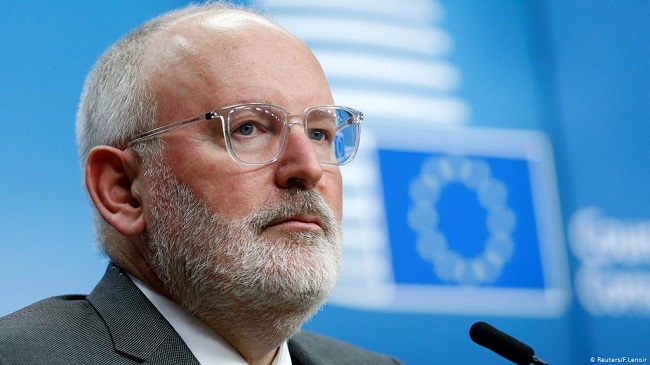 The European Commission wants a stronger focus on hydrogen power in its energy system and ...