Tale of woe as floods ravage the nation 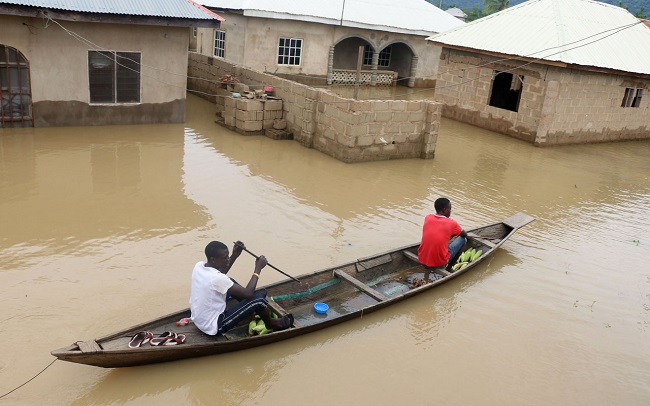 The raging flood, which has affected at least 12 states across the country, remains worrisome not only to the victims but also the government, as Rivers Niger and Benue continue to rise in volume, according to National Emergency Management Agency (NEMA).

The current flood pattern, which experts say has shown indices of a similar natural disaster of 2012 in many parts of the country, has left hundreds of victims with tales of woes, with many others living in fear.

A survey by the News Agency of Nigeria (NAN) showed that some lives have been lost while farms, houses and livestock destroyed as floods ravage communities most parts of North-Central Nigeria, the region said to be most hit in this year flood.

NAN correspondents who visited some of the affected areas in the region report that many communities, especially those contiguous to Rivers Niger and Benue, have been submerged and in the process, victims have been relocated to camps opened by respective governments or seek refugee with relations.

Residents of the affected local government areas have been relocated to the Internally Displaced Persons (IDPs) camps or taking refugee with friends and relations house.

Parts of the Lokoja-Abuja road has also been threatened by the ever-increasing floods.

According to Alhaji Alhassan Aiyegba, Executive Secretary, Kogi State Emergency Management Agency (SEMA), 64 communities have been submerged by the flood.

“There are camps for the displaced persons, but the situation gets worse every minute,’’ Aiyegba said.

Mr Sanusi Yahaya, the Commissioner for Environment and Natutral Resources in the state, also told NAN that the situation was becoming much frightening as more communities were being submerged in Lokoja, the state capital.

“Government has set up a camp for the flood victims in Lokoja, the capital city. The worst hit areas are Wada Estate and the Old Poly Quarters,’’ he said.

He said that the state government was collaborating with relevant stakeholders to ensure that relief materials and the essential facilities were provided in the camp.

“We have had challenge of water supply, but that has been resolved.

“But since it is an emergency, we will be solving the problems as they are identified.

“Accommodation is still adequate for the number of people that are in the camp so far, and the camp can still accommodate more people.

“Officials of NEMA visited the IDP camps in Koton-karfe few days ago and on their way to Lokoja with other team sent by the Federal Government,” Yahaya said.

The commissioner advised residents of flood-prone communities to immediately relocate to safer places to avoid loss of lives and property.

Yahaya noted that all the indices in place before the 2012 flood occurred had manifested.

Mr James Ahmadu, Director of Relief and Rehabilitation of the Kogi State Emergency Management Agency, told NAN that the flood victims had been trooping into camps in Lokoja in their large number since it was set up.

Ahmadu said that the data of the victims were being accommodated as they arrived, adding that about 100 households had arrived the camp.

“Many victims are still coming with majority of them being women and children,” Ahmadu said.

Mr Umar Zakari, the Camp Leader, said that most of the victims were from Adankolo quarters where he said property, foodstuff and farms were totally destroyed by flood.

He commended the state government for the temporary accommodation provided for victims and urged relevant stakeholders to join with government to cushion the effect of the natural disaster.

“We thank government for providing water, but we need food, mosquito nets, light and clinic. Our children are getting sick,” Zakari said.

NAN reports that Kogi government had earlier set up five camps in Kotokarfe, where about 64 communities have been submerged by flood.

Meanwhile, the Chief Judge of the state, Justice Nasir Ajanah, has disclosed that the High Court complex, in Koton-Karfe was among structures submerged by flood.

He said the court would be relocated “to ensure that the development does not affect the dispensation of justice.”

Ajanah, while assessing the extent of damage on the submerged complex, also said that the relocation became imperative to arrest the perennial breaks in the administration of criminal justice in the area.

“The busiest prison yard in the state is located is this town. So, it is important that we relocate the court from here to another location within the town.

“That is the most important thing to do now because this is a very busy place,” he said.

Ajanah said the cost of putting up a new complex for the High Court and the Chief Magistrate’s Court in Koton-Karfe would be included in the state supplementary budget.

He expressed optimism that the supplementary budget would be approved, and money released.

Meanwhile, as more displaced persons rush to IDPs camps in the state, the Nigerian Medical Association (NMA), Kogi chapter, has donated drugs to victims’ camps in Kogi and Kotonkarfe.

Dr Kabiru Zubair, the state Chairman of the association, handed over the drugs to local government officials at the camps in Ogbakwu and Edeha communities.

Zubair said: “We decided to visit the IDPs camps in Kotonkarfe to support and sympathise with them.

The visit is also to educate them on hygiene in order to maintain clean environment and avoid outbreak of communicable diseases.

“Today, we have donated drugs such as Vitamin C, anti-malaria, antibiotics to the camps’ to aid in the management of some common diseases likely to occur in this kind of situation.

“We have also sensitised them on health education in order to avoid outbreak of cholera and other communicable diseases, because prevention is better than cure.”

The chairman also said that the chapter was also collaborating with the state government to provide manpower in the clinics in the camps.

According to him, doctors will be on ground in all the camps throughout the period of the flood to ensure that patients are well managed.

“Those that have serious cases will be referred to the General Hospital, Kotonkarfe, Kogi Specialist Hospital, Lokoja or Federal Medical Centre (FMC), Lokoja.”

The situation appears the same in Taraba where hundreds of farmlands have already been submerged.

Our correspondent, who visited some of the areas in the state reports that the situation had been compounded by the release of water from Lagdo Dam in Cameroun with hit Local Governments being Gassol, Ibi, Lau and Karim Lamido.

In Gassol, flood has destroyed mass of farmlands while the council Chairman, Mr Yahuza Yau, confirming that two bridges had been damaged.

Yau said that the council has set up a committee to compile the list of villages affected while residents of villages along river Benue have been advised to relocate.

Benue, severely hit last year by flood, is also facing similar experience this year, though on a much smaller scale so far.

However, to forestall colossal damage, the Benue State Government has dug drainage in most parts of Makurdi and constructed several canals where flooding was massive last year.

He said people were being sensitised to take care of the environment and avoid building near river or blocking water ways.

NAN learnt that Makurdi International Market was being prepared for people that might be affected by floods.

At the city centre, NAN found that people in flood-prone areas had mobilised themselves to evacuate blocked drainage.

In Niger, NAN found a more devastating situation with Bosso Local Government with record of some deaths.

In Shiroro Local Government, the story was devastating with communities like Nungu, Ungwan Bagudu, Rafin Gora, Mashigi, Ungwar-Abok submerged by flood while the IDPs were sheltered at the Zungeru Primary School.

In Lapai Local Government Area, it was a picture of farms, houses and livestock destroyed but Gov Abubakar Sani, who visited the area promised to investigate ways to control the menace.

In Plateau, floods were being experienced in the traditional areas comprising Ungwan Rogo and other settlements along Bauchi road.

“People get unnecessarily stubborn; they keep building houses along waterways and in water logged areas, year after year.

“Sometimes, they ignore advice to relocate in the face of imminent danger, until it is too late. This is sad,’’ he lamented.

The Commissioner of Environment, Abdullahi Abbas, however, told NAN that everything was being done to check the menace.

“The flood was devastating in the past, especially in 2012; we do not want a repeat.”