The Minister of Sanitation and Water Resources, Kofi Adda, has made a passionate appealed to all Ghanaians to join in the collective effort to redeem the international image of the country that has been tainted by poor sanitation. 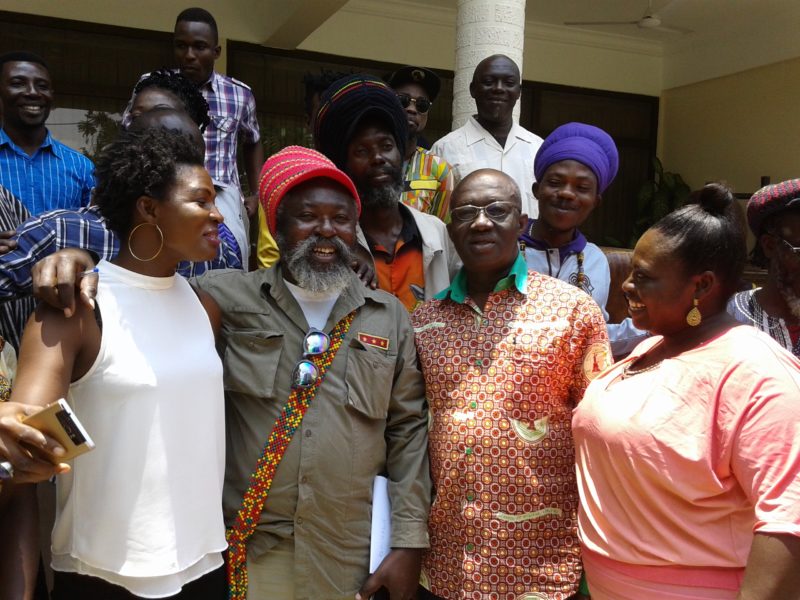 Addressing a forum held on Tuesday, September 5, 2017, in Accra for members of the creative industry, the Minister expressed disgust at the fact that “Ghana is now the 7th dirtiest country in Africa,” and said “it is so shameful considering that Ghanaians are playing key roles in various international positions.”

He urged the artists to support his Ministry in a soon-to-be-launched exercise to secure the commitment of corporate entities to help eradicate open defecation and improve general sanitation in the country.

The forum was organised by World Vision International in collaboration with Kings Hall Media, a water and sanitation-focused firm. The purpose was to brainstorm on ways the creative industry could best contribute to resolving the nation’s sanitation problems, particularly open defecation.

Members of the creative industry including some of Ghana’s popular musicians and actors who were at the forum had a rude awakening of the reality of the menace of open defecation, after being treated to the mathematics of human faeces.  A Water, Sanitation and Hygiene (WASH) consultant, Benjamin Arthur, educated them as follows:

“The baseline information is that each human produces an average of approximately 123.6 grams of faeces per day. This assumes one shit per person per day, which means no running stomachs and no constipation, with all things in the normal state.

Experts say one gram of human faeces contains over 10 million germs. From the mathematical perspective it means that Ghanaians are daily discharging billions of disease-causing agents into the environment through open defecation.

Now when cement is left in the open, it cakes up and cannot be used for any good purpose, but must be discarded. Unfortunately, our faeces or shit left in the open do not just cake up. When faeces is left at the mercy of the elements – rain, sun  and wind – it ends up contaminating the soil, water sources and air, leading to transfer of potential disease causing agents.

What is worrying about this state of affairs is that once faeces are exposed, coming into contact with it is very easy, especially as water and soap are not readily available on site for handwashing.

“The fact is that we pick up germs with our hands from various points including when we clean ourselves after using the toilet, during playing or working, from objects such as doorknobs and stair railings as well as from handshakes. As long as the immediate surroundings and wider environment is polluted with faecal matter, it stands to reason that everything within its reach will be contaminated with the germs,” he said.

Mr. Arthur made it clear that open defecation was the riskiest of all sanitation practices, posing the greatest danger to human health by causing diseases such as cholera, dysentery and diarrhoea, which are all easily preventable. He stated that, economically, the country was losing $290 million annually, with open defecation contributing about $79 million, while undermining the country’s tourism industry.

Mr. Arthur said that to eliminate the practice and its menace would require that people build and use about one million household latrines, which in addition to other measures will enable Ghana to meet her obligations under the Agenda 2030, also known as the Sustainable Development Goals (SDGs). He explained that the SDGs, developed by the international community and member states of the United Nations, cover 17 sectors with targets and indicators to measure progress of achievement from now to 2030.

The consultant stated that the focus of Agenda 2030 for the WASH Sector is that countries with open defecation-associated problems are expected to be Open Defecation Free (ODF) by 2030. It is expected that, by time, every citizen will have access to, and use improved toilet and hand washing facilities and Ghana is obligated is obligated to do so. He said, “The deadline for an Open Defecation Free Ghana is 2025, which is just eight years away.”

This sensitisation resulted in animated discussions on the consensus that “open defecation is bad for the national image, the health and well-being of the people and the socio-economic development of the country.” The artists traced the causes to lack of enforcement of policies, obsolete policies, and politicisation of issues, among other things.

National President of the Ghana Actors Guild, Samuel Fiscian, remarked that “open defecation is not an issue that should be joked with.” He noted that “absence of enforcement has led to apathy, which has now become part of our culture and is very dangerous.”

Chairman of the Greater Accra Regional branch of MUSIGAH, Ras Caleb Appiah-Levi, noted that the contribution of artists towards addressing open defecation and general sanitation issues would be successful depending on the effectiveness of existing structures.

The artists stressed the need for the laws to be made to work and insisted that, rather than imprisoning offenders, they should be made to undertake a period of cleaning and wearing special uniforms that will identify them.

The artists also expressed the willingness to join the fight against open defecation and made several proposals including producing an all-star video clip featuring combined artists depicting the issues at stake; embark on a Creative Arts Campaign against Open Defecation at the national, regional and district levels; and undertaking communities and schools outreach events.

On how to move the process forward in terms of organising these activities and ensuring sustainable funding, they suggested the setting up of a Committee to follow up on issues from the forum and organising further trainings to enhance understanding of artists on open defecation and general sanitation related matters.

On how to ensure sustainable funding, renowned Ghanaian actor, Oscar Provencal, suggested that sources of funding could include instituting a Corporate Ghana Tax Rebate for entities that will fund sanitation as well as special levies on activities such as lotteries.

Earlier, some sanitation-related organisations had delivered solidarity messages. They included the Executive Secretary of the Environmental Services Providers Associations (ESPA), Ama Ofori Antwi. She re-echoed the sector minister’s concern about the impact of the ranking of Ghana as the 7th dirtiest country saying, “It is a blot on our image and must be reversed at all cost. We cannot afford to lose the sanitation battle. It is costly on our health, productivity, and finances, and even dignity.”

She also congratulated World Vision and Kings Hall Media for bringing the artists together to join the efforts at addressing open defecation. Ms. Antwi was optimistic that because Ghana’s creative industry was a vibrant one, with very influential personalities, “it can undoubtedly help us rewrite our sanitation story.” She described her organisation as an association of private waste management companies, has been in existence since 2001, and whose members are active stakeholders in Ghana’s sanitation sector.

For his part, the Vice Chairman of the Coalition of NGOS in Water and Sanitation (CONIWAS), Attah Arhin, said his group was happy to be associated with the programme because, according to him, it has the potential to help address sanitation issues in Ghana. He was certain that “the creative arts can make positive contributions to the fight against open defecation and general sanitation.”  Mr. Arhin also commended the minister for his leadership in the sanitation sector.

On behalf of World Vision Ghana, the Education Technical Programme Manager, Andrew Ofosu Dankyi, stressed that, in dealing with the menace of open defecation, “the goal is to get a 100 percent open defecation free Ghana.” He said that “as a lower middle income country striving to improve our status, sanitation must not be allowed to hamper our national development efforts.”

Mr. Denkyi said aside promoting WASH, World Vision also engages in education especially that which deals with specific issues for specific target groups such as adolescent girls. He said World Vision International Ghana would continue to work with the Creative Industry to make a positive contribution to the quest for an Open Defecation Free Ghana.