October 11, 2017 Comments Off on Stakeholders call for fortification of food with micronutrients to stem ‘hidden hunger’ 982 Views

Stakeholders in the agriculture and health sectors of the Nigerian economy have canvassed for the fortification of micronutrients in staple foods to stem the ugly effect of hidden hunger. 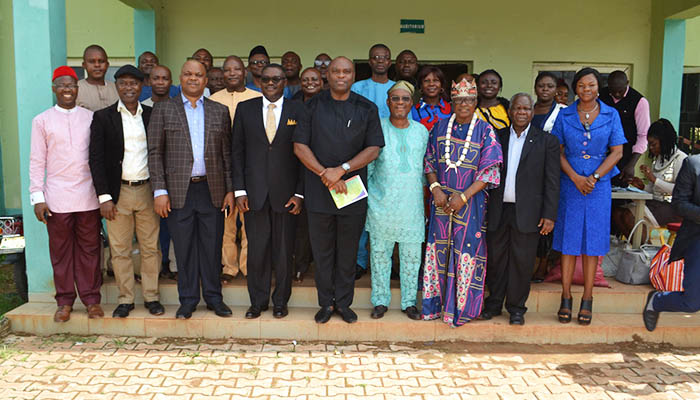 They made the call on Tuesday, October 10, 2017 during the maiden international conference on Food Security and Hidden Hunger organised by the Faculty of Agriculture, Federal University Ndufu-Alike Ikwo (FUNAI), Ebonyi State with the theme “Hidden Hunger Dynamics: Opportunities and Challenges for Meeting the Sustainable Development Goals.”

Declaring the conference open, the Vice Chancellor of the University, Prof. Chinedum Nwajiuba, noted that the era of oil boom was over and advised governments at all levels to invest massively in Agriculture in order to mitigate the incidence of poverty and hunger in the country.

He maintained that Agriculture has a strategic role to play in Nigeria’s quest for economic stability, food security and employment generation for the youths. The Professor of Agricultural Economics further stated that the university established a Faculty of Agriculture in order to help its host community in particular and Ebonyi State in general achieve their agricultural prospects.

He further said: “Our Faculty of Agriculture was established to give practical skills to the students in order to make them employers of labour and contributors to the growth of our nation’s economy on graduation”, stressing that the faculty would be different in many ways as students would be exposed to the rudiments and dynamics of modern farming.

Delivering the lead paper of the conference entitled “Hidden Hunger Dynamics: Opportunities and Challenges for Meeting the Sustainable Goals”, the Vice Chancellor of the University of Port Harcourt, Prof. Ndowa Ekoate Sunday Lale, said: “Hidden hunger means inadequate consumption of nutritious food bearing in mind that the psychological use of food is within the domain of nutrition and health, adding that “food preparation and packaging affect its nutritional contents.”

He noted that no nation has achieved food security despite the notable increase in food production in different parts of the world, stressing that 60% of the world’s hungry were women while in every 10 seconds a child dies from hunger-related diseases.

He therefore canvassed for increased intake of nutritional and fresh food and the shunning of processed ones and the invigoration of the school health programmes in order to mitigate the negative effect of hidden hunger on people like malnutrition, obesity, wasting and the likes.

He lauded the federal government initiative of fortifying salt with vitamins A, calling on agencies of government charged with implementation and monitoring to go the extra miles to secure compliance from all stakeholders. He maintained that for hidden hunger to be curtailed in the country, government should enforce the fortification of all stable foods with essential nutrients like it is being done with salt.

The Professor of Medicine further advised the ministries of heath and agriculture and its agencies to work in synergy, also urging them to work directly with the people for the government policy on food security to have consummate impact on the citizens.

Earlier, the Chairman of the Local Organizing Committee for the conference, Prof. Dr. Jonny Ogunji, and the Acting Dean, Faculty of Agriculture, Dr. Christiana Igberi, spoke on the rationale for hosting the conference and the benefits to be derived from it by all stakeholders.

Ogunji noted that preventing hidden hunger in all its forms was essential for achieving almost all the Sustainable Development Goals, stressing that the goals were to assess efforts made towards food security realisation, stimulate debate on hidden hunger, improve diets and raise levels of micro-nutrition among others.

Igberi on her part noted that the establishment of a Faculty of Agriculture in the university was one of the greatest achievements of the present University Management, adding that the consequences of hidden hunger on people were long term and profound. And called on all relevant stakeholders to have a re-think in the issue of food security especially nutrition.

The opening ceremony of the conference was chaired by the Chief Medical Director of the Federal Teaching Hospital Abakaliki (FETHA), Dr. Emeka Onwe Oga.