The Lagos State government has been asked to continue to showcase the benefits of its tree planting initiative, as a climate change mitigation and adaptation measures, to other parts of the country. Under the initiative, the state has within the past seven years planted over five million trees. 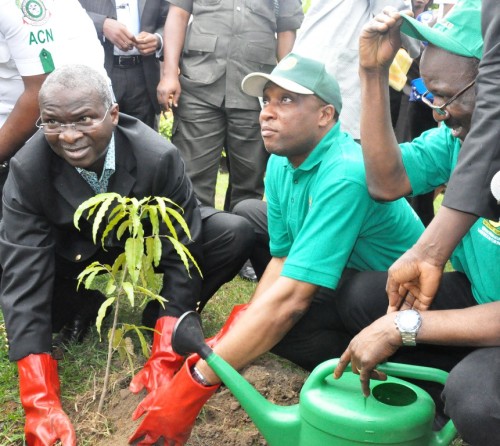 This formed one of the numerous resolutions at the 7th Lagos State Summit on Climate Change held last week. It had “Seven Years of Climate Change Governance in Lagos State, Celebrating Success Stories, Reviewing Challenges and Setting Future Agenda” as its theme.

Participants at the three-day conference described tree planting is an effective mitigation measure for reducing the impact of climate change, pointing out that urban reforestation, in particular, is a laudable approach to improving carbon sequestration of urban areas and mitigating climate change-induced urban heat island.

While observing that climate proofing agriculture and its resilience to variations in climate is critical for sustainable food security in the state, delegates submitted in a communique released at the close of the summit that the state should likewise look into the feasibility of enriching its remaining forest areas in the context of REDD+ (Reducing Emissions from Deforestation and Forest Degradation) to create financial value for carbon stored in forest, address the drivers of deforestation, enhance its carbon sequestration for climate change mitigation, and provide additional means of livelihoods for the concerned communities.

Some other recommendations in the communique are listed to include:

While declaring the summit open, Governor Babatunde Fashola noted that since 2009 the climate change summit has been a principal vehicle for attracting required attention to environmental challenges. He stressed the need for mankind to reflect on the threat posed by the continuous exponential growth of the world population to the sustainable exploitation and use of natural resources.

Fashola highlighted achievements made by government in the past seven years in mitigating the effects of climate change, adding that most of government’s actions emerged from the outcomes of the summits.

Besides the planting of five million trees, he listed the outcomes as: