May 27, 2018 Comments Off on Shell targets youths, communities in development portfolio 892 Views

The Shell Petroleum Development Company of Nigeria Limited (SPDC), operator of the SPDC Joint Venture, has restated its active presence in Delta State against the belief in some quarters that the multinational energy firm has pulled out of the state. 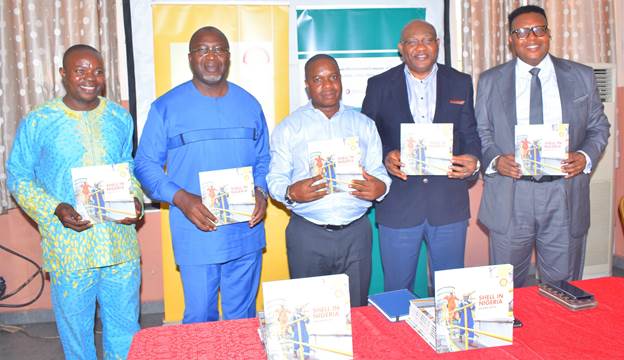 As a proof of its significant footprints in Delta State, the company said it has implemented wide ranging projects in different parts of the state, including the disbursement of N1.88 billion to Global Memorandum of Understanding (GMoU) clusters in host communities and the establishment of a Professorial Chair at the Federal University of Petroleum Resources, Effurun (FUPRE).

SPDC’s General Manager External Relations, Igo Weli, said this at the presentation of the company’s 2018 Briefing Notes to journalists in Warri on Thursday, May 24, 2018 where he said the company recently donated N600 million facilities to five schools under a Youth Sports and Athletics Development Project (YSADP) to mark Nigeria’s centenary anniversary.

“These projects show our continuous presence and interest in the development of Delta State,” said Weli, who was represented by the company’s Head of Community Interface, Evans Krukrubo. “While it is true that SPDC divested from a number of assets in Delta State in line with our business strategy, and in support of the participation of more Nigerian companies in the oil and gas industry, we are still active in the state, for example, operating Forcados Terminal, flow stations, gas plants and a network of pipelines. There is no better way to relay this message than undertaking projects and initiatives that are helping to rebuild lives and communities in the state.”

The GMoU funding covers the three clusters currently active in Delta State since the inception of the concept in 2006. The Cluster Development Boards (CDBs), like their counterparts in other parts of the Niger Delta, are implementing health and educational projects, among others.

The centenary project in Delta State, which was inaugurated this month, includes the development of an athletic curriculum by Africare, an international NGO, using the American National Collegiate Athletic Association standards, the provision of facilities for long/triple jump, high jump, shot put, javelin, discus and hammer throw in five schools as well as the construction of a 400m six-lane rubberised track at Government College, Ughelli.

A key component of the project was the inclusion of 283 athletic and leadership training sessions, academic performance tracking and mentoring. A total of 150 students from across the five project schools benefitted from the leadership programme.

Delta State Governor, Senator Ifeanyi Okowa, had said that the project marked a major turning point in the lives of students and communities.

The Professorial Chair in Light Weight Automobile Engine Development was activated at FUPRE in December last year and is the latest of six established by SPDC JV. The Chair at Effurun is expected to contribute to the growth of local content in Nigeria’s automobile industry.

In a bid to boost employment especially among youths, more than 700 young men and women benefited from Shell’s LiveWIRE initiative between 2003 and 2017. Also, a total of 160 students from Delta State have received the SPDC flagship Cradle-to-Career scholarship awards since they were instituted in 2010. The programme offers fully-funded six-year awards for children from rural communities to attend some of Nigeria’s top secondary schools.

Mr. Weli added: “SPDC JV is always prepared and willing to contribute its quota to the development of its host communities in close collaboration with other stakeholders. It is however, necessary for communities to help create a conducive atmosphere to attract and retain investments in the Niger Delta. Violence, vandalisation of pipelines and other anti-social behaviours will not only discourage investments but also impede the holistic development we badly need in the Niger Delta.”