Five species of sharks and two manta ray species on Sunday, September 14 received protection under the United Nation’s Convention on International Trade in Endangered Species of Wild Fauna and Flora (CITES) when formal measures to regulate their international trade came into effect. 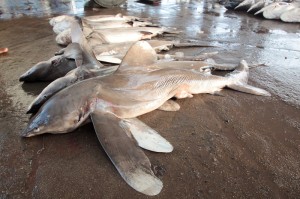 All the sharks except Porbeagle are caught for their fins, which are exported to East Asia, especially Hong Kong, where they are the key ingredient in sharks-fin soup, an expensive, but popular delicacy.

The Porbeagle Shark is mainly caught for consumption of its meat within the European Union, while the gill plates of manta rays are highly valued as a health tonic in southern China.

All the species are commercially valuable and threatened through over-harvesting.

Under the newly introduced CITES measures, their commercial trade must be strictly regulated and the species can only be exported or taken from national and international waters when the exporting / fishing country certifies they were legally sourced and that the overall level of exports does not threaten the survival of the species.

In March last year, representatives from the 178 government Parties to CITES voted to include the shark and ray species within Appendix II of the Convention.

There are a number of technical issues associated with this listing, such as enforcement agencies learning how to identify products in trade, especially the fins that are usually traded in dried form and the Parties were given an 18 month period to prepare for the introduction of CITES requirements.

Many organisations, including the CITES Secretariat, the United Nations Food and Agriculture Organisation (FAO), plus non-governmental organisations including TRAFFIC and WWF have therefore worked to improve capacity on managing shark fisheries to bring them in line with CITES rules before today’s deadline.

Supported by the German government, TRAFFIC developed guidelines for countries who will need to make informed decisions – so-called “non-detriment findings” or NDFs – about the levels of trade shark populations can sustain, before CITES permits can be issued. The NDF guidelines are being widely distributed to fisheries management authorities.

In parallel, as part of a UK government supported project, TRAFFIC has developed M-risk, a novel method to quantify the risk of over-exploitation of shark stocks as a result of poor or inadequate management.

“TRAFFIC is fully committed to ensuring successful implementation of CITES measures for these shark and ray species, both in terms of demonstrating the value of the Convention for regulating trade in commercially important marine species and also that there is ultimately conservation benefit in doing so,” said Glenn Sant, TRAFFIC’s Fisheries Trade Programme Leader.

Many of the sharks are caught as a secondary catch by vessels targeting tuna.

“International co-operation to implement the new CITES measures will be essential, and the member governments of those organizations who manage tuna fisheries in the world’s oceans have a key role to play in ensuring their success,” said Sant.

“There are no insurmountable technical obstacles to overcome in implementing CITES requirements, and the NGO community, including TRAFFIC is standing by ready to assist, if required.

“There is a lot at stake here: restoring the world’s shark stocks is crucial to maintaining the health of our oceans.”