Have scientists who turned carbon emissions into rock saved the world?

November 26, 2016 Comments Off on Have scientists who turned carbon emissions into rock saved the world? 1,295 Views

Earlier this year, a project in Iceland reported an apparent breakthrough in the safe underground storage of the principal greenhouse gas, carbon dioxide – an option likely to be necessary if we’re to solve our global warming problem. 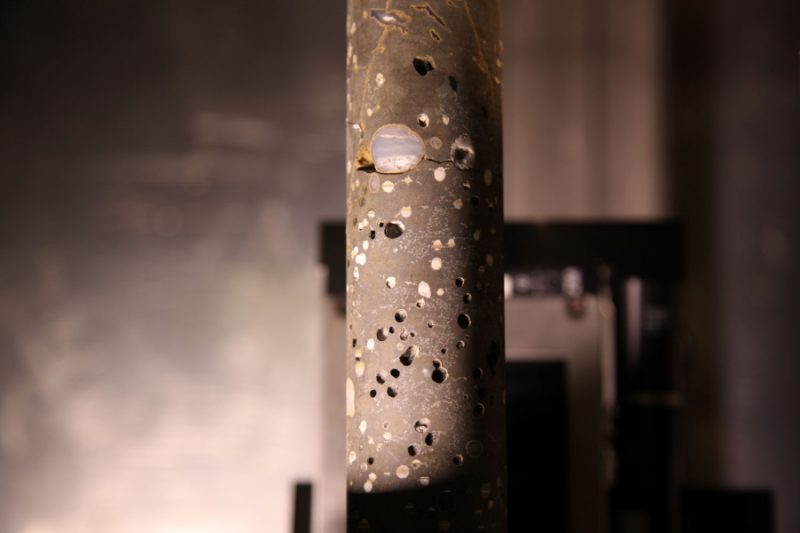 A core sample from research conducted to sequester carbon dioxide in basalt rocks. The white areas within the dark basalt rock core sample show where the carbon dioxide has reacted with minerals in the basalt and converted into a carbonate mineral similar to limestone. Photo credit: Pacific Northwest National Laboratory.

The Carbfix project, run by a leading Icelandic producer of geothermal power, Reykjavik Energy, announced that it had successfully injected 250 tons of carbon dioxide, dissolved in water, into an underground repository of volcanic rocks called basalts – and that the carbon carbon dioxide hadn’t just stayed there. No – it was way better than that. Instead the carbon dioxide had apparently become one with the basalt, undergoing a fast chemical reaction and forming a type of rock called a carbonate in two years’ time.

That’s a big deal because it means the gas would not escape back to the atmosphere again even if the underground repository were somehow compromised. And now, a group of American researchers has taken the science even farther, once again suggesting that storing carbon dioxide stripped from industrial processes, or sucked from the atmosphere, in basalt rocks may be a key part of the solution to climate change.

Peter McGrail of the Pacific Northwest National Laboratory, a branch of the Department of Energy, and his colleagues were also working on storing carbon dioxide in basalts, based upon small scale laboratory experiments showing the gas does bind with the rock. And they, like the Carbfix project, were ready to scale up and perform an actual injection, in this case 1,253 metres deep into basalts from the Columbia River region of Washington State.

In their results reported recently in the journal Environmental Science & Technology Letters, they go beyond the Carbfix project in several key ways, McGrail said. First, they injected carbon dioxide in its fluid, supercritical form, which is most likely to be how it is received and transported from industrial projects. And second, after two years had passed, they took core samples of the rocks, using a battery of tests to prove definitively that the CO2 had indeed turned into a carbonate rock called ankerite, comprised of calcium, carbon, oxygen, iron, magnesium, and manganese.

This was a key demonstration because there are some carbonates that occur naturally in basalts, and so it was important to distinguish the new rock from what had already been there.

“We’d seen these things in the lab, but the field is often a case where your best laid plans and ideas from lab experiments fall apart, and just don’t work out,” said McGrail. “And the fact now that we’ve seen this after just two years with the exact really same things that we’ve seen in the laboratory, it’s a really significant result for us.”

In effect, what the researchers in both Iceland and Washington State were accomplishing was a high speed version of the geological process known as “weathering,” in which carbon dioxide very slowly becomes locked away in rock layers.

Perhaps the most impressive part of the study was the researchers’ ability to analyse the very carbon itself inside the rock samples that they recovered two years after injection. Here, they looked at the ratio of two “isotopes,” or slight variants, of carbon to one another. This way, they were able to show that the rock contained a higher ratio of the slightly lighter carbon 12, as opposed to the somewhat heavier carbon 13, thus showing a signature that matched up with the fossil fuel-based carbon dioxide that had originally been pumped into the earth.

“There is no other possible explanation,” said McGrail. “The only way that those carbonates had formed, it had to come from the CO2 that we injected.”

McGrail says that after this successful field test, the next step for the research will now be to scale up and start injecting even larger quantities of carbon dioxide into basalts, in volumes more representative of an industrial scale operation.

The new study is impressive, said Klaus Lackner, a researcher at Arizona State University who directs its Centre for Negative Carbon Emissions, where he is developing technologies to capture carbon dioxide from the ambient air all around us – a process that would have to be complemented by some form of long-term storage of the gas. Lackner knew the project was ongoing but was not involved in the work.

“Taking this study together with the Icelandic study, you see real progress toward making in situ mineralisation a high quality affordable carbon storage technology,” Lackner said. “Sure, there are more questions to answer, but these papers represent immense progress.  The two studies complement and reinforce each other.”

Lackner added that “basalts on land and below the ocean floor are so abundant that if they can be pulled in, we have indeed unlimited storage capacity.”

McGrail’s vision appears slightly different, though. He believes that, much of the time, CO2 will be sequestered in geological repositories that contain it safely, but that do not react with it to form rock. However, he thinks that in key locations where basalts are available but other repositories are not, basalts will be used.

But Lackner stressed the advantage of having the carbon dioxide permanently become rock.

“There is a real value in being sure that storage is permanent on a geological time scale and that the carbon does not need any further monitoring,” he said. “Once you made carbonate there is no reason why it would revert again. You hit the thermodynamic ground state and it is very difficult to dislodge it from there.”

Either way, the new research appears to be another step along the way to a world in which, even if our industrial processes necessarily produce lots of carbon dioxide, we have other options than to just let it spill into the atmosphere.