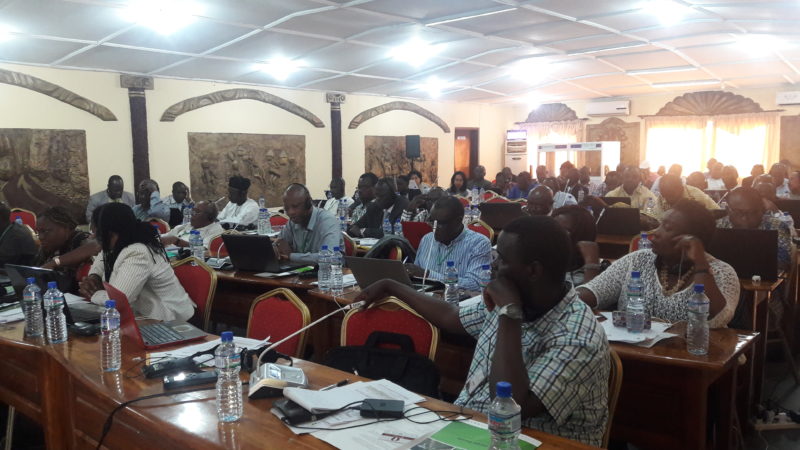 Participants at the workshop, where concerns were raised over the prospects of Africa’s forests

The African forestry is severely endangered.

This is a consensus shared by many forestry experts, policy makers and concerned stakeholders in the field across the continent.

They believe that there is need to understand the issues plaguing the forests as well as exchange knowledge and experiences with themselves on ways to stop the loss of further forest areas and how to restore the losses.

This was the major aim at this year’s regional workshop organised by the African Forest Forum (AFF), in collaboration with the University of Lome, Togo. The workshop which, lasted for five days in the coastal Togolese capital city, saw an array of professionals presenting their findings and recommendations on the state of the different aspects of African forestry.

“This workshop was organised with the primary intention of sharing information on the results of our work in the past two to three years with the wider public in Africa. We intend to see how we can move forward with some of the issues that came from this work and that is why we have assembled people from different sectors, not only forestry but even the media to highlight the issues we think are of crucial relevance to the continent,” said Godwin Kowero, Executive Secretary of the AFF.

The AFF is a network of experts committed to the sustainable management, use and conservation of the forest and tree resources of Africa.

Forests play a great role in gathering and releasing water for the maintenance of the habitats of flora and fauna. Forests reduce the effects of flooding, dry land salinity and desertification.

Recognising the role trees play in our ecosystem and to our existence cannot be overstressed, says Aster Gebrekirtos, a dendrologist at the World Agroforestry Centre in Nairobi, Kenya. He believes the importance of preserving the forests is a matter of grave concern.

“Trees matter because they are a source of food, water, nutrition, fuel and much more. Our earth would be inhabitant without trees as they cool the environment. Without trees, we would not survive so it is important to plant and to conserve what we have,” she adds.

Records show that 1.6 billion people depend on forests for livelihoods, medicine, fuel and food. Forests also cover one-third of the earth’s land mass, contributing significantly to reducing soil erosion and the risks of landslides, avalanches and other natural disasters.

According to Gebrekirtos, the reason forestry appears to be a neglected field is because people have failed to see the other advantages of forests aside logging and as a carbon sink.

With better awareness, private sector engagement and more favourable policies aimed at regulating the way trees are felled for fuel, food and shelter, she believes, a lot of improvement can be recorded.

Joshua Cheboiwo, Coordinator for the Kenya Forestry Research Institute (KEFRI), who presented a study on the state and potential of public private partnership in the sector from East Africa, agrees as he points out that the “forest sector is emerging as an attractive investment destination in the region and has attracted many players. The private sector will increasingly play greater role in both primary and secondary production.”

He, however, notes that the key actors in the forestry sector are segregated and need to be organised into efficient production units.

As to the danger facing the African forest, Francis Bisong, a professor in the Department of Geography and Environmental Science in the University of Calabar in Cross River State, attributes it to the growing population and cultural norms that encourage large families.

“The African forest is seriously endangered because of the human impacts like the population growth and meeting the needs of an expanding population for food, housing, transportation, energy supply and more. All this will be, if not properly managed, at the expense of forest land. Agriculture is done at the expense of forest land and so is development,” says te Nigerian.

In his opinion, the role sustainable development plays in protecting the forest as well as meeting the development needs of people is critical as Africa remains “the fastest growing region in the world with a significantly high birth rate.”

His words: “Cultural norms are such that large families are highly encouraged and this increases dependency on the natural forest for survival. There is therefore a need for proper planning that demands sustainability.”

Another aspect of sustainable forest management that was raised centred on the need for better tree quality which Marie-Louise Avana Tientcheu, an expert in tree germplasm from West Africa, believes will improve the quality of forest products/services and their resistance to pest and diseases which could benefit future generations.

Although pests and diseases have historically militated against the realisation of optimal yields in forestry, Harrison Kojwang, who studies the state of pest and diseases in southern Africa, believes that concerted efforts on pests and disease control and management with regards to control of movement and surveillance of plants as well as better training of forest managers can reduce or wipe out the effects.

He states that the economic and ecological costs of pests and diseases can be huge, and their recent and continuing spread need urgent and concerted regional efforts.

It also pays to consider the major role trees play in reducing the amount of greenhouse gases at a time when the whole world is talking about how to mitigate the effects of climate change, he stresses.

With climate change prediction models clearly revealing that Africa will suffer the most negative impacts of the phenomenon, it is imperative to deal seriously with the declining forests, he further notes.

While most African countries are party to the International Environmental Agreements in the UN-systems like the REDD +, AR-CDM, AFOLU and other global initiatives set up to maximise the forest’s role in addressing climate change, they rarely fully utilise these mechanisms for their socio-economic and environmental benefit.

In a presentation, Fredrick Mulenga points out that African countries need to implement forest-based mitigation mechanisms using more domestic budget financing than depending on pledges and foreign donors, which has been the case in many African countries.

According to him, countries facing the challenges of implementing climate change mitigation and adaptation could learn from successful fellow African countries and elsewhere.

Without a doubt, forests and trees must be in good condition and managed sustainably to effectively support peoples’ livelihoods, national economies and the environment. It is also clear that there is very little time left to act which is why AFF hope the different findings from the different regions across the continent shared at the workshop could help intensify action for sustainable forest management among the different stakeholders.