February 9, 2018 Comments Off on Russian group in eco-tourism visit to Nigeria 1,330 Views

The oldest Traveler’s Society of Russia, Geographer, has taken to Nigeria a six-man “travelogue by bus” from Russia, Europe to western Africa. The exercise is a continuation of the World expedition, which started on October 1, 2017 in Moscow, the Russian capital. The land-over team arrived Benin City, the Edo State capital, Nigeria where it anchored for two days, before going to Enugu and few other Nigerian cities. 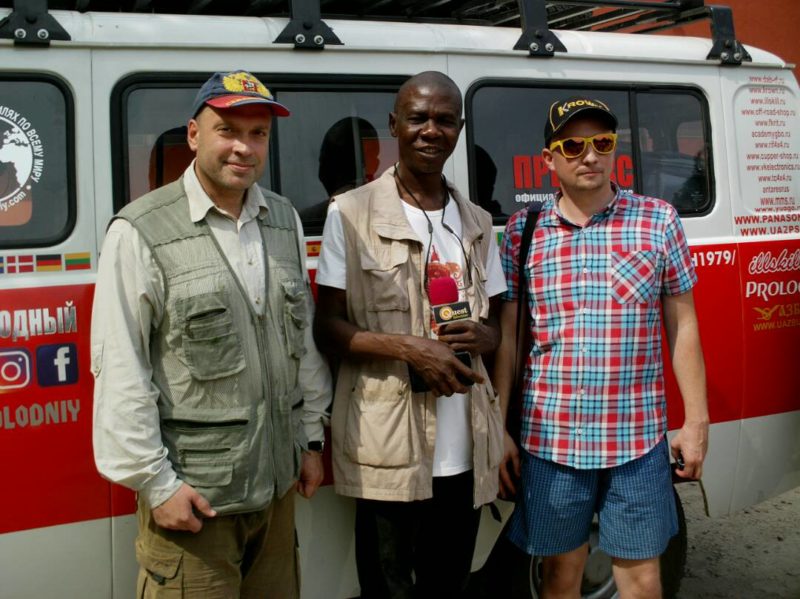 The Russian tourist team in company of a local official

The Nigerian itinerary of the six-man expedition was partly organised by Jemi Alade Tours Limited, one of the oldest and foremost Nigerian tour and ecotourism organiser managed by Ladi Jemi-Alade, who was valuable in the formulation of the Nigerian Tourism Master Plan. The expedition to Benin City was also conducted by Tony Erha, a journalist and tour/ecotourism guide.

In the national museum grounds of the National Commission for Museum and Monuments (NCMM), Benin City its Curator warmly received the team. Some other locations visited in the city included the Bronze Casting Centre at Igun and the Ebohon Cultural Centre.

While addressing journalists during the excursion visit, Balandinski hinted that the nickname of the expedition derives from the 4 X 4 Minivan UAZ-452- also called “Buhanka” (translated from the Russian language into English – “a loaf of bread”), due to the shape of the bus. It is the first bus to be manufactured in Russia, and has come in several models.

The 1965 model of the minibus, which he said is the mascot of the journey themed: “Around the World on a Loaf”, is one of the models that depict Russia’s identity. The bus uses petrol and liquefied gas and cost some $8,000. 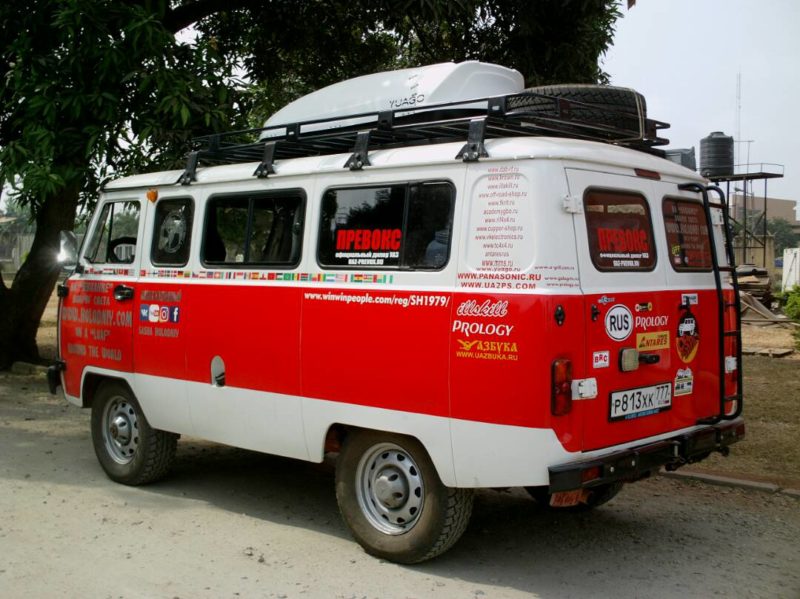 Indications of the various countries it has visited in the clustered trip showed miniature stickers of usual maps of the over 42 countries it has sequentially travelled in Europe and Africa.

The tour project, he also disclosed, was being undertaken by a specialised group of Russian travel/tourism volunteers, who are in the league of other land-overs and touristic institutions around the world, particularly those in Europe. He further hinted that the group has a mandate to help Russian tourists and investors to travel to different countries and to discover new tourism and investment destinations. The travelogue group also professes to be al major facilitators or contributors to tourism and general development of the destinations they visit, by recommending such destinations to the numerous tourists and investors on their network.

Balandinski emphasised: “The expedition and its destinations and outcomes have wide support of the Russian automobile and equipment manufacturers, state and public organisations.”

However, he called for effective synergy between Nigerian governments, the tourism and travel sub-sectors, businesses and the general public in this regard.

Apart from many of the European and other developed countries the group has toured, Balandinski explained that their present voyage to Africa is long stretched, and started about 42 days back in Moscow, Russia, covering about 43,000 km distance. Countries visited, according to him, include: Morocco, Mauritania, Senegal, Gambia, Guinea Bissau, Guinea Conakry, Sierra Leone, Liberia, Cote D’Ivoire, Burkina Faso, Cameroun, Gabon, Congo, Angola, Namibia, South Africa, Ghana, Togo, Benin and Nigeria.

The group, while answering questions from journalists, said that the Nigerian country and most of its people have a negative image-impression amidst Russians and the travelling populace. This, he revealed, tends to discourage more tourists from coming this way. Balandinski said he was a first-time visitor to Nigeria, but quickly retorted that their experience during the visit tend to portray the opposite about Nigerians. He acknowledges to a Nigerian people that are very receptive, supportive and well-cultured.

“Where ever we go in Nigeria, we see a people who are very warm, helpful and peaceful than the average African. The Nigerian police are very accommodating and not the bribe-takers, like we had been reminded by negative media reports and those who may have not come here and see things for themselves. In Nigeria, we have not witnessed anything like the extortion and intimidation that some country-policemen in the sub West Africa did to us. Anyway, our good experience about Nigeria has been confirmed by several groups of tourists, who came here recently, that Nigeria is really good and not as bad as it is negatively portrayed.”

Balandinski’s advice was that Nigeria should work assiduously to discourage its wrong global image profiling by the global press. “The negativity of crisis situations like the Boko Haram and other criminality, that will not make tourists to go to the North East and some other sides of the country should be quickly addressed. Nigeria is a great country and Africa’s heartland that could play a bigger role in the affairs of the world if it is properly managed. No doubt, there are always some good and negative things to say about any country and its people. But the advantages are far more than the disadvantages, in the case of Nigeria.”

Mr. Erha, an itinerant tour organiser and guide, expressed happiness that numerous tourists, in groups and individuality, continue to visit Nigeria, particularly Edo State. He attributed it to the years of efforts the like of Ladi Jemi-Alade and his outfit have put in by attracting tourists to the country.

“Although, Edo State is far behind in the availability or provision of the needed tourism and recreational facilities, that attract tourists, there is no doubt that the state government, particularly the current one under Governor Godwin Obaseki, is doing its best to develop the tourism business.”

Erha also identified the uniqueness of Edo State as one of the prime destinations of tourists, with its central location in Nigeria, and its huge tourism and ecotourism allures.

Erha is a keen birdwatcher and ornithologist (one who studies bird), who has carried out bird survey in Nigeria. He discovered Taraba State in 1998 as a destination and transit for ringed birds on seasonal migration from Russia, Finland, Sweden and Germany, which was once highlighted by the foreign and local media, thus assisting the establishment of the first Nigeria’s International Bird Office by the Nigerian Conservation Foundation and BirdLife International in Buru, Donga local government area of Taraba.

“It is so interesting that whilst migratory forest birds from Russia, Finland, the Balkan and Scandinavian countries take about 20 days to migrate to important rainforest habitats like Baissa of Taraba State and the Okomu National Park and Ogba Zoo and Nature Park (both) in Edo State, respectively, a 43,000 km road distance and cross-over of the Mediterranean Sea on boat by the present Russian land-over team and others covered about 45 days. It therefore means that whilst men make the rigmarole and cumbersome land distance, migratory birds fly the shorter and definite routes they have cleverly perfected. God and His Nature are truly wonderful.”

Like Loading...
2018-02-09
admin
Previous: Space, the next frontier to fight climate change
Next: Climate crisis and struggle for African food sovereignty