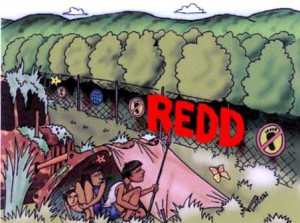 The No REDD in Africa Network (NRAN) and its allies have condemned the evictions and forced relocation of the Sengwer Indigenous People in Kenya’s Cherangany Hills, as well as the World Bank-funded Reducing Emissions from Deforestation and Forest Degradation (REDD) programme in the country.

In an open letter to the United Nations and the Kenyan government, the NRAN states: “The forced relocation of the Sengwer People proves the urgency of cancelling REDD.”

The group is also calling for the creation of an International Truth Commission on the forced relocation of the Sengwer People and abuses associated with REDD and carbon offsets throughout the world.

“We take great exception to the press statement issued by the World Bank in which it attempts to distance itself from this forced relocation of the Sengwer People. The cause and effect is perfectly clear; the Bank in its highly controversial role as both carbon credit financier and broker is aiding and abetting the forced relocation of an entire Indigenous People through its Natural Resource Management Plan (NRMP) which includes REDD in the region.”

The NRAN, together with 65 organisations and renowned human rights activists, are alarmed at what appears to be a connection between these evictions and the World Bank’s funding of the Kenyan government’s REDD+ Readiness Programme in the Cherangany Hills through the bank’s Natural Resource Management project.

The group describes REDD as a highly controversial emissions reduction scheme that uses forests, plantations and lands in the Global South as carbon offsets and supposed sponges of carbon emissions and fossil fuel pollution from the Global North.

Nnimmo Bassey, founder of Health of Mother Earth Foundation (HOMEF) in Nigeria and former Chair of Friends of the Earth International, states: “The denial of complicity by the World Bank in the forced eviction of the Sengwer people from their forests is ludicrous. We will not be fooled as the fingers of international financial institutions (IFIs) like the World Bank and other carbon cowboys are clearly visible in the unrepentant push of neoliberal agenda to exploit, despoil and displace poor communities and grab their resources including carbon. This nonsense must stop.”

Anabela Lemos, founder and Director of Justiça Ambiental, Mozambique, submits: “In the Maputo Declaration (2013) we had predicted that REDD-type projects would lead to displacement of forest-dependent communities, servitude, killings, repression and other human rights abuses, and the Sengwer Peoples’ plight is a clear example of what we condemn and why there must be no REDD in Africa.

Yator Kitum, a spokesperson of the Sengwer people, says: “We demand that the government of Kenya recognise and promote the kind of conservation practiced by the Sengwer and other forest people, which has clearly shown that forest ecosystems, protected areas and other natural resources are well protected when the rights of forest indigenous communities are recognised.”

Ruth Nyambura, Advocacy & Communications Coordinator at the African Biodiversity Network in Nairobi, declares: “We are demanding that the Kenyan government immediately stop the evictions and provide reparations to the Sengwer people, in addition to providing a formal apology recognizing their rights. We are also calling on the UN and African Commission on Human and Peoples’ Rights to respond to these demands and requests, and take the corresponding action.”

The NRAN has repeatedly warned that the scale of REDD-related land grabs in Africa could be so massive that they may eventually constitute a “continent grab.”

The Bundles Care Support Initiatives, an NGO, on Thursday,...

With global climate action lagging behind the scale needed...

In less than a month, Latin America and the...