Warnings of climate emergency after surface temperatures 1.35C warmer than average temperature for the month 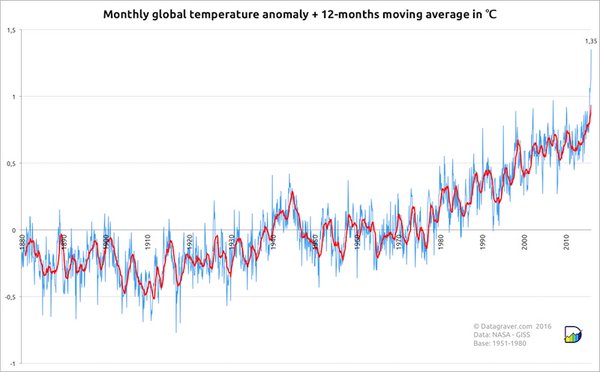 Monthly global surface temperatures (land and ocean) from NASA for the period 1880 to February 2016, expressed in departures from the 1951-1980 average. The red line shows the 12-month running average. Image credit: Stephan Okhuijsen, datagraver.com

Global temperatures in February smashed previous monthly records by an unprecedented amount, according to Nasa data, sparking warnings of a climate emergency.

The result was “a true shocker, and yet another reminder of the incessant long-term rise in global temperature resulting from human-produced greenhouse gases”, wrote Jeff Masters and Bob Henson in a blog on the Weather Underground, which analysed the data released on Saturday.

It confirms preliminary analysis from earlier in March, indicating the record-breaking temperatures.

The global surface temperatures across land and ocean in February were 1.35C warmer than the average temperature for the month, from the baseline period of 1951-1980.

The month did not break the record for hottest month, since that is only likely to happen during a northern hemisphere summer, when most of the world’s land mass heats up.

“We are in a kind of climate emergency now,” Stefan Rahmstorf, from Germany’s Potsdam Institute of Climate Impact Research and a visiting professorial fellow at the University of New South Wales, told Fairfax Media.

“This is really quite stunning … it’s completely unprecedented,” he said.

By Michael Slezak, The Guardian of London