The Paris Agreement on Climate Change is set to become law this year after a ceremony at the UN Headquarters in New York on Wednesday saw 60 countries worth 47.5% of global emissions complete their formal ascension to it and 13 others commit to doing so this year. 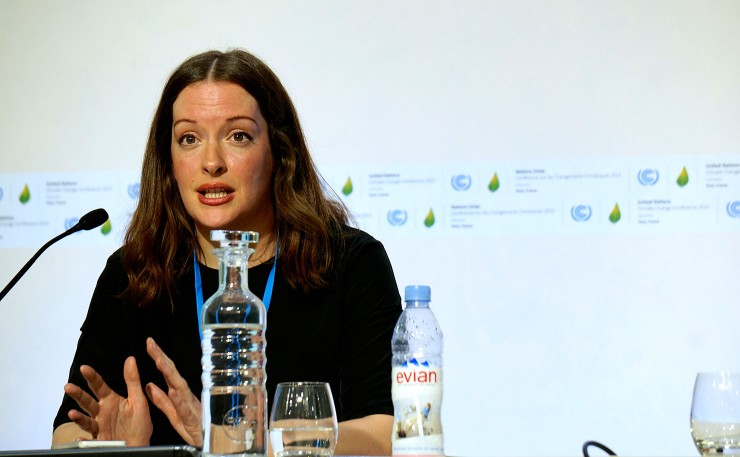 Liz Gallagher, Senior Associate, E3G. She says the Paris Agreement is on track to break records as the international treaty fastest to become law

Wednesday’s ceremony was regarded as significant because one of the two thresholds required for the agreement to come law were met: more than 55 countries formally joined.

According to observers, all that remains is to meet the second threshold: countries responsible for 55% of global emissions must ratify. With signals of intent from the additional countries at the ceremony, the second threshold is expected to be reached before or during the next major climate negotiations in Marrakesh this November.

The speed with which the agreement will enter law is unprecedented, they noted, adding that for example, the Kyoto Protocol took seven years to become law and it was widely anticipated that the Paris agreement would take until 2020 to come into effect.

As well as making the Agreement law, entry into force is significant because it means the parties, or countries, who have ratified the agreement can get on with actually implementing it to its full potential. Finalising this symbolic formality can help to concentrate minds and political will on the immediate action required to help keep the promises made in Paris viable. Early entry into force would also give an additional confidence boost to investors and citizens that the transition to the low carbon economy is in full swing.

The Climate Action Network (CAN) welcomed the progress made on ratification and called upon the remaining countries to ratify the Paris Agreement as soon as possible so as to reach the threshold on emissions and allow the historic deal to preserve the planet for future generations to come into force and be implemented.

Upon the conclusion of the ceremony, spokespeople made significant comments.

“That the Paris Agreement is on track to break records as the international treaty fastest to become law bodes well as it is a signal that countries just want to get on with it.  But the journey has only begun. The next test awaits in Rwanda in October where countries must agree to an ambitious timetable to phase down dangerous greenhouse gases, HFCs,” said Liz Gallagher, Senior Associate, E3G.

“The upcoming entry into force of the Paris Agreement is the important signal that businesses have been waiting for. With this clear direction of travel from political leaders, companies can now accelerate efforts to achieve a zero carbon future,” stated Paul Polman, CEO of Unilever, a member of the Corporate Leaders Group.

Jill Duggan, Director of The Prince of Wales’s Corporate Leaders Group: “We are delighted at the unprecedented speed with which this historic agreement will come into force. This shows that governments have understood and responded to the urgency of the climate challenge – a challenge demonstrated by the record breaking temperatures experienced, yet again, this year.  The ratification by the European Union, which accounts for 12% of global greenhouse gas emissions, will be instrumental to reaching the required threshold of 55 countries and 55% of emissions.

“European leaders should be commended for agreeing to speed up their ratification process. Members of The Prince of Wales’s Corporate Leaders Group call on the EU to stay at the forefront of climate action and fully join the Paris Agreement in the next couple of weeks, triggering an entry into force at COP22 in Marrakesh.”

Alden Meyer, Director of Strategy and Policy, Union of Concerned Scientists: “Today’s announcement that the Paris Agreement will take effect this year is good news for the planet, and underscores the growing momentum for climate action.   But much work remains ahead on both implementing and raising the ambition of countries’ emissions reduction commitments, if we’re to reach the Paris goal of net zero global warming emissions by mid-century and avoid the worst impacts of climate change.”

Wael Hmaidan, Director, Climate Action Network International: “The Paris Agreement was only a start to building international consensus to fight climate change. It is a fight that requires every country, city, business and citizen to do all that they can, as quickly as they can, to scale-down the pace of, and ultimately halt, climate change. The prospect of this Agreement coming into force in just a year is a clear signal that we have absolutely no time to waste and its implementation must begin in earnest.”

Sierra Club’s Executive Director Michael Brune: “Today’s announcement marks a major tipping point in our planet’s history. Countries have come together at an unprecedented and historic rate to continue the progress the world made in Paris last year, and we applaud the collective global leadership that has driven us to this moment. With the Paris Agreement’s imminent entry into force on the horizon, we wholeheartedly look forward to doing our part to continue the work toward a thriving clean energy economy, a stable climate, and a healthy planet.”

Sven Harmeling, CARE International: “CARE welcomes the prospects for an early entry into force of the Paris Agreement already in 2016 and urges all other countries to rapidly ratify. But ratification is not enough: Governments in particular from the most powerful countries need to cut emissions quickly in light of the 1.5 degrees C limit. More resources are needed to help the most vulnerable women, men, girls and boys build their resilience to climate impacts and disasters, and protect those displaced from climate loss and damage, an increasing harm recognised at this week’s UN Refugee summit.”

Adriano Campolina, ActionAid Chief Executive: “World leaders have kick started efforts in the ever-increasing battle against climate change, but we are still further than we had hoped we would be today. Early entry into force of the Agreement less than a year since Paris would have been an important signal and step forward to protect the lives of millions of people around the world.

“European countries’ failure to ratify today is a dent in the climate leadership it has prided itself on previously. The EU must now swiftly agree to ratification. And in order to reclaim its role as a true climate leader it must take early action, before 2020, to ensure that keeping the world below 1.5C degree warming is not an elusive dream.”

Lutz Weischer, Team Leader International Climate Policy, Germanwatch: “The ratification of the Paris Agreement by 60 countries sends a very clear signal that the world is serious about climate action. What worries us is that Europe and Germany are now at risk of being left behind in the transition to a decarbonised world economy, after years of investment in climate solutions. We call on Germany and the EU to ratify the Paris Agreement and deposit their instruments with the UN in the next few weeks. To regain ground in the decarbonisation race, Chancellor Merkel also needs to significantly improve the draft 2050 climate plan her government is currently debating – right now, Germany is not on track to meet its Paris commitments.”

May Boeve, 350.org Executive Director: “The historic pace at which countries are joining the Paris agreement brings it significantly closer to entering into force, yet there remains a massive gap between what the agreement calls for and what world governments are actually doing to meet these targets.

“Each of the last 16 consecutive months have been the hottest in history, with 2016 shaping up to be the hottest year on record – a title that we’re getting far too accustomed to applying year after year. Around the world, there is a powerful and growing fossil fuel resistance movement that is pushing our institutions and governments to divest and break free from fossil fuels to prioritise people and planet.”

Wendel Trio, Director at Climate Action Network (CAN) Europe: “Today’s ratification announcements inject more momentum into the Paris Agreement and are important steps towards getting real action to start. We are pleased to note that the EU, while feeling the international pressure, finally recognised the urgency and is willing to show unity and move its ratification forward. Leaving New York, EU decision-makers must get into poll position and use this opportunity to translate crucial parts of the Agreement into real action. This includes being pro-active and agreeing now on a process to increase its weak 2030 target by the next big international moment in 2018 the latest.”