Early intervention and strong political will to fight against environmental hazards have helped Côte d’Ivoire avert what would have been a damaging toxic dumping tragedy, says a United Nations Environment Programme (UNEP) audit report. 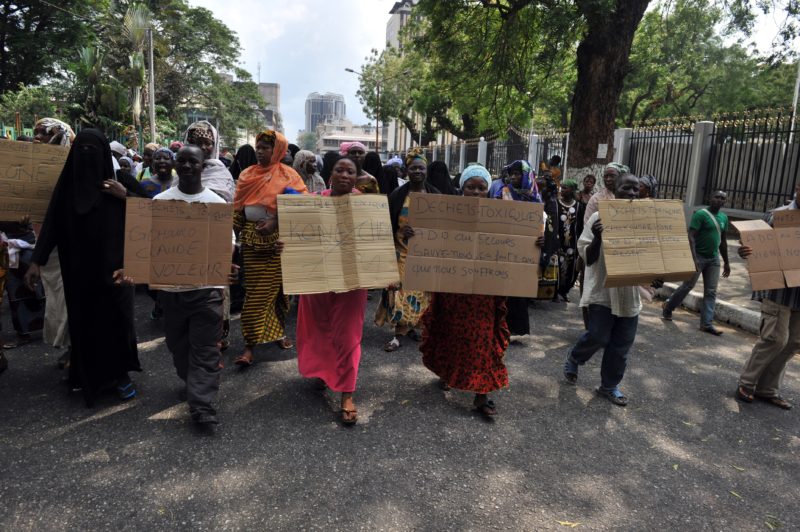 Public protest against the Probo Koala waste dump in Abidjan, Côte d’Ivoire in 2006

The audit report, presented on Wednesday, January 31, 2018 at the Bamako Convention COP2 assembly in Abidjan, lauded the timely intervention of the Ivorian government with measures to mitigate what would have been the worst environmental disaster in the country.

“It is reassuring to see that, with early intervention and strong political will, a disaster like the chemical contamination incident in Côte d’Ivoire can be mitigated over time,” UN Environment Deputy Executive Director, Ibrahim Thiaw, said.

“This independent and scientific environmental audit of the sites gives us access to a vault of best practices and pitfalls of the disaster response, and allows us to learn from a tragedy like this,” he added.

The UNEP regional director for Africa, Juliette Biao Koudenoukpo, noted that though there was general lethargy in most African countries to implement the Bamako Convention on preventing Africa from becoming the dumping ground for toxic waster, the example from Côte d’Ivoire shows that innovative pathways can bring lasting solutions once there is a clear political will.

“We are proud of the measures put in place by the government of Côte d’Ivoire to fight against toxic waste dumping and environmental pollution,” she noted.

It will be recalled that national and international civil society organisations decried the illegal dumping of toxic waste in and around Abidjan, Côte d’Ivoire, six years ago by a multinational company, Trafigura.

Different organisations had published reports including documentation of various illnesses people in the areas where such dumping were taking place have been suffering from as a result of the dumping of toxic waste in their communities.

But the good news is that the Ivorian government reacted promptly to ward off what experts say would have been the worst environmental disaster in the entire West Africa.

The UN Environment thus conducted an independent audit of the sites affected by the 2006 waste dumping from the Probo Koala in various parts of Abidjan, Côte d’Ivoire.

According to the audit, multiple innovative actions were put in place just on time by the government.

The audit noted that, in reality on August 19, 2006, the Probo Koala, chartered by shipping firm Trafigura, offloaded 528 cubic metres of liquid waste in the port of Abidjan. The waste was then transferred onto tanker trucks operated by a local contractor and dumped in 12 different locations around Abidjan.

Hours after the dumping, residents reported being overwhelmed by a strong smell and experiencing detrimental health effects such as respiratory difficulties and skin irritations.

As a precautionary measure, the Ivorian government ordered the closure of schools in affected areas and the destruction of fruits and vegetables grown near dumping sites.

Livestock raised in proximity to some sites was also culled while fishing was banned in the bays of the Ébrié Lagoon.

In other measures the government provided medical assistance and facilities to over 100,000  people affected just weeks immediately following the dumping.

A series of clean-ups began in September 2006 and saw the sites excavated and the toxic materials shipped to France for incineration.

In the following years, several further clean-up and remediation activities were conducted by various actors including the Ivorian government.

According to the audit report, the swift mitigation measures taken by the Ivorian government paid off.

In January 2017, UN Environment conducted a follow-up mission to carry out complementary sampling and to fill specific analytical gaps and to corroborate initial findings from the laboratory analysis.

In both missions, the UN experts were joined in the field by three experts from the Ivorian Anti-Pollution Centre (CIAPOL).

The results obtained showed that none of the dumping sites had contamination exceeding the limits set by the Government of Côte d’Ivoire for remediation.

As a result, none of these sites requires additional intervention, even when gauged against Dutch intervention values, which are among the most commonly used guidelines for contaminated site management and remediation worldwide.

It also showed that elevated levels of chromium were observed in soil and water at the site in Agboville where maize that was potentially, and indirectly, impacted by the Probo Koala wastes was deposited.

As a result, the UN Environment recommended further assessment and close monitoring of the Agboville site and the continuation of restrictions imposed on public access to the facility, as well as the erection of signs to warn the public against harvesting grass or vegetables from the premises.

It also calls for due diligence for the decommissioning of the Akouédo municipal waste disposal site, which has long been earmarked for closure.

In the meantime, UN Environment recommends consideration of land use restrictions, in particular for agriculture on the site.

Based on the contamination levels at the Koumassi site, UN Environment calls for a comprehensive environmental assessment of the area to be undertaken as a basis for an action plan to mitigate impacts on public health.

It further urges the government to ensure that workers are provided with personal protection equipment and trained on occupational health.