May 27, 2018 Comments Off on Rainy season: FCTA intensifies surveillance to tackle outbreak of diseases 721 Views

The Federal Capital Territory Administration (FCTA) has intensified surveillance to tackle outbreak of diseases, which usually occur during the rainy season. 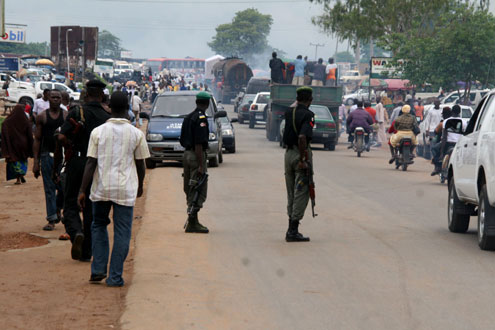 Gwagwalada, one of the six local government area councils of the Federal Capital Territory of Nigeria

Dr Humphrey Okoroukwu, the Director of Public Health in the Health and Human Services Secretariat, FCTA, made this disclosure to the News Agency of Nigeria (NAN) in Abuja on Saturday, May 27, 2018.

Okoroukwu said his department had embarked on a sensitisation programme to educate the FCT communities on the need to ensure clean environment as well as drink clean and safe water.

The director said that as the rainy season set in, diseases such as diarrhoea, cholera and malaria were common among the people.

He urged residents in the communities, who had no access to pipe borne water to boil their water before drinking, saying that could be easily contaminated during this season.

The director also enjoined residents to clear their surroundings and drains to avoid mosquitoes, which could transmit malaria.

“I am urging residents of the territory to go to the nearby health centres if they have any issues.

“Accessing health care on time is important because real time reporting will help in quick response,’’ he said.

Okoroukwu said his department would continue to educate and sensitise residents of the territory, especially those in the rural areas to minimise any disease outbreak arising from rainy season.