The Katsina State Emergency Management Agency (SEMA) says 4,000 houses have been destroyed by rainstorms in some parts of the state during this year’s rainy season. 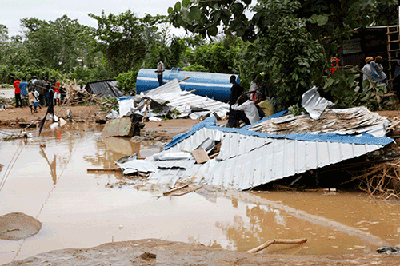 Homes left in ruins after a rainstorm

The SEMA Executive Secretary, Alhaji Haruna Musa, who disclosed this to newsmen in Katsina, the state capital, on Thursday, September 13, 2018, said two persons have also died in building collapse during the season.

Musa said that several others sustained various degrees of injuries, while several houses were destroyed.

He said that Baure, Daura, Jibiya, Malumfashi, Kusada and Musawa Local Governments were among the worst affected areas.

“We receive reports of rainstorm on daily basis from different parts of the state,’’ he said.

He said the agency had assessed the incidents, with a view to assisting the victims, adding that after the assessment, the state government provided relief materials to alleviate the suffering of the victims.

In a related development, The National Emergency Management Agency (NEMA), North-West zone, has organised a stakeholders meeting in the state.

The meeting was aimed at ascertaining the level of the state’s preparedness and collaboration in disaster management.

The Zonal Coordinator, Mr Ishaya Isah, stressed the need for all stakeholders in disaster management to work together to evolve a culture of preparedness, prevention, resilience and response to disaster.

“This is with a view to proffering solutions towards efficient and effective disaster management.

“Let me at this juncture warn that unless disaster management and risk reduction are effectively driven at all levels, their impacts will be extremely difficult and costly to address,” he said.