The Concerned Stakeholders of Association of Waste Managers of Nigeria (AWMN) on Sunday, February 25, 2018 condemned a statement credited to an aggrieved group within the association faulting the resolve to work with the Lagos State Government and an environmental utility group, Visionscape Sanitation Solutions, to ensure cleaner and healthier environment. 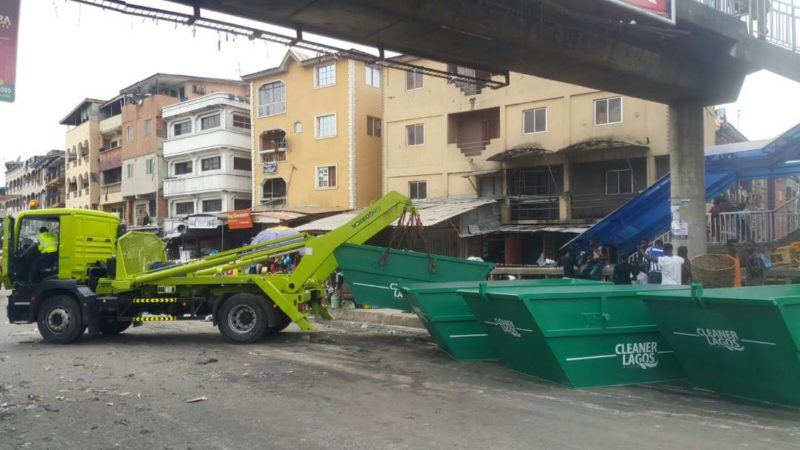 CLI and Visionscape officials placing waste bins at a spot

The aggrieved group, in a statement by its Chairman, Oladipo Egbeyemi, had distanced itself from the agreement to work with the state government to rid the state of filth adorning major streets and highways, describing the resolution as misleading and untrue.

Responding, the concerned stakeholders, in a statement signed on their behalf by Kasumu Afis Olasehinde of Gafista Concepts Limited, said the statement by the aggrieved stakeholders was not only in bad taste but had shown them to care less about the interest of Lagosians.

The stakeholders, comprising of 48 Private Sector Participant (PSP) operators in waste management, said their resolve to work with the state government to ensure the success of the Cleaner Lagos Initiative (CLI) was borne out of the genuine desire to protect the environment and prevent outbreak of any epidemic in the state, considering the resurgence of refuse in public places.

The statement said, “This kind gesture was warmly received and accepted by the government but, to the surprise of many, a group believed to be aggrieved from AWMN, has come out to disown us for offering a helping hand, you must ask why? Are they angry with progress? Are they people-oriented at all? Is this challenge a thing of pride and ego to them or service to the people?

“We have been rendering unequalled outstanding waste management service to Lagosians for decades and it is the state of things that necessitated our group’s initiative to offer help and also collaborate with Visionscape. The Visionscape group sees us as partners who will learn a lot from each other and they are willing to collaborate with us to make Lagos clean.

“We also state that the wellbeing of Lagosians is utmost in our mind, and as we approach the raining season, we cannot just watch but also intervene to avoid epidemic, which is what the aggrieved group does not care about.

“We can’t afford to let the Cleaner Lagos Initiative fail because, if it does, we will also be considered as failure, hence a need to take responsibility as a people-oriented group to render service whether paid or unpaid; laudable to say the least and quite commendable and any progressive would agree with my group,” Olasehinde said.

While describing change as inevitable, Olasehinde said it was surprising that some people who in the past had benefited from change were working against progressive change, and also attempting to discourage those who were genuinely willing to help government in the best interest of the people.

“Change is inevitable, other aggrieved operators can collaborate to deliver service with Visionscape without making drama out of it. It should be a collective joy to see people of Lagos living in comfort, you don’t wish failure on a vendor because you feel you can do better, and finally, it is unruly to attempt to pour cold water on the bravery and courage of the noble men who tried to swallow hurts and offer help. If we all contribute something, Lagos will work for us all by default,” he said.

While standing by the resolve of the stakeholders to work with government, Olasehinde commended the state government for coming up with the Cleaner Lagos Initiative, saying the policy and the law promulgated to back it up would no doubt proffer a permanent solution to waste management in the state.

He particularly lauded the clear distinction under the CLI between commercial and domestic waste, among other innovations geared to revolutionise waste management in the state.